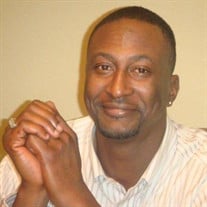 Antone Erve was born on March 19, 1974, to the late James Percy Brown and Drusilla Watson Erve of Vaiden, Mississippi. Antone gave his life to Christ at an early age, joining Vaiden Friendship Baptist Church. Antone graduated from Vaiden High School in May 1993. He served in the Mississippi Army National Guard before joining the United States Army in May1993. While enlisted, he served as a field artillery radar operator as well as an environmental compliance officer. Once honorably discharged, Antone led a successful 20-year career in the natural oil and gas field as a production lease operator and lead operator for Global Santa Fe, Island Operating, Chesapeake Energy, and Crosby Energy. On March 13, 2010 Antone married the love of his life, Christina LaPoint Erve, and to the union two children were born, Christopher and Mattilyn. The life of the party, Antone leaves a huge hole in the hearts of his family and friends who were always entertained by his animated stories and hilarious sense of humor. Whatever the circumstance, he always left you with a smile upon your face. To have known Antone was the greatest gift one has ever accepted.No matter the request, he gave his all to ensure his family and friends were taken care of. He was loved by everyone who ever met him. Anyone who knew Antone, knew his family meant the world to him and in his eyes each of you reading this was family or you wouldn’t be here today. He touched the lives of so many people across multiple generations. His zest for life was evident in his love for blues music, traveling, spending time with family and riding his motorcycles, or as he referred to them, his side pieces, Big Red and R.E.D. (Ready Every Day). He was preceded in death by his father James Percy Brown, mother Drusilla Watson Erve and brothers Walter B Brown, Ivy Brown, Odell Brown, Charles Brown and his sister Evonne Erve. Antone transitioned on April 18, 2022 in Dallas, Texas. Raised by his elder sister Jean, he leaves to cherish his memory, his wife of 12 years, Christina LaPoint Erve; two sons, Brandon Armstrong and Christopher Erve; one daughter, Mattilyn Erve; brothers BT Erve (China) of Vaiden, MS, Calvin Brown (Sue Ann) of Milwaukee, WI, and Kerwin Erve of Fort Worth, TX; his sisters Jean Erve of Vaiden, MS, Silla Erve of Detroit, MI, Mary Brown Abner of Detroit, MI, Elaine Erve Roberts of New Orleans, LA , Lubertha Brown of Harper Woods, MI, Brenda Erve of New Orleans, LA , Bernice Erve Bridgford(Michael) of Arlington, TX , Corretta Erve-Greer(Flayton) of Nolanville, TX; godson Austin Erve of Baton Rouge, LA; two revered aunts, Millie Murphy-Wilson and Mattie Jennings; and a very special cousin E.J Guice, who he mentored and thought Antone hung the moon. Antone also leaves to cherish his memory a host of nieces, nephews, cousins and good friends. Please Click on the Link Below to Live Stream Services Celebrating the Love, Life, and Legacy of Mr. Antone Erve: http://webcast.funeralvue.com/events/viewer/72574

The family of Antone Erve created this Life Tributes page to make it easy to share your memories.

Send flowers to the Erve family.