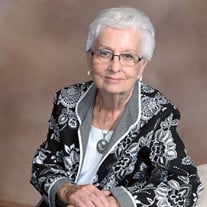 Avonne Raley Bullock, 88, passed away on January 11, 2022. Nicknamed at birth, she was known to her family and later her grandchildren as Mitzi. Avonne was born and lived her entire life in Dallas, Texas. She passed away peacefully of natural causes. Avonne was born on December 11, 1933 at Baylor hospital in downtown Dallas. She was the daughter and only child of Clarence and Era Raley. She was a graduate of North Dallas High School. On February 16th, 1957, she married her husband Stan Bullock. They were to celebrate their 65th wedding anniversary this year. After they were married and before they had children, Avonne worked as a secretary for the regional president of an insurance company. Later once her children were older, she worked for Titche’s Department store and later in the Admissions Office of Southern Methodist University and finally in the administrative office of Baylor Home Healthcare . An avid bridge player and book club participant, she and Stan were members of Wilshire Baptist Church from 1968 until her passing. From its inception, she was also an active member of Charlie’s Angels Sunday School class. Notably, Avonne was a caregiver for 17 years to her mother-in- law, Hazel Bullock, who moved in with the family in 1968 following an illness. She is survived by her husband Stan, her two children Allison and Jay, their spouses Chad and Lauren and her four grandchildren, Forrest, Peyton, Carson and Jack Henry. A memorial service will be held on Saturday January 15, 2022 at 2 pm in the main sanctuary of Wilshire Baptist Church. Avonne will be laid to rest in a private ceremony at Restland Cemetery in Dallas. In lieu of flowers, the family asks that donations be made to Wilshire Baptist Church, the Visiting Nurses Association or the charity of your choice. The family would like to extend a special thanks to the staff and nurses of Fountainview at Highland Springs and the Visiting Nurses Association of Collin County. Avonne will be fondly remembered by all for her love and devotion to her Lord and Savior, her family and her many close friends.

Avonne Raley Bullock, 88, passed away on January 11, 2022. Nicknamed at birth, she was known to her family and later her grandchildren as Mitzi. Avonne was born and lived her entire life in Dallas, Texas. She passed away peacefully of natural... View Obituary & Service Information

The family of Avonne Raley Bullock created this Life Tributes page to make it easy to share your memories.

Send flowers to the Bullock family.