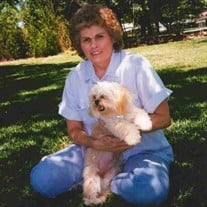 Becky Sue Wilson, age 80, passed away on Wednesday, March 30, 2022, in Mesquite, Texas. She was born to Mr. Larry Eads and Ms. Gloria Gray on Monday, April 21, 1941, in Dallas, Texas. She married Freddie Glenn Wilson in 1960. After several year of marriage, she was widowed with two boys to raise. Becky began working at Safeway as a cashier. Later she was employed at Restland Funeral Home for many years before retiring. Becky is survived by two sons: Ricky Wilson and David Wilson and his wife Jill; five grandchildren: Clinton Wilson, Connor Wilson, Matthew Wilson, Amanda Wilson, and Cade Wilson; and three great grandchildren: Zoe Wilson, Hunter Wilson, and Lily Wilson. She was preceded in death by her husband of nearly 30 years, Freddie Wilson, and beloved great grandson Blake Wilson. Becky leaves her loved ones with unforgettable memories and loving stories. She will be sincerely missed by her loving family, devoted friends, and all the wonderful individuals who knew and loved her. Services for Becky Wilson will be held in the Wildwood Chapel at Restland Memorial Park on Thursday, April 7, at 10:00 AM. Her visitation will be held on the same day at 9:00 AM in the Wildwood Chapel. Funeral arrangements for Ms. Becky Wilson have been entrusted to Restland Funeral Home and Cemetery, located at 13005 Greenville Ave, Dallas, Texas, 75243, (972) 238-7111.

The family of Becky Sue Wilson created this Life Tributes page to make it easy to share your memories.

Send flowers to the Wilson family.