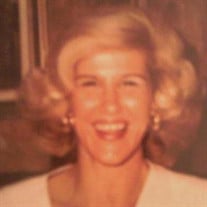 Betsy Gessell Larkin, 80, of Dallas, TX, passed away on May 1, 2022 - the 29th anniversary of her father's death. Mother of three, Cookie Grandma to six grandchildren and one great-grandson, she lived 80 years and deserves to be beautifully remembered. She was a military spouse, a firefighter's wife and widow. Betsy worked for 30 years at Chicago Title in the Park Cities office. She beat cancer twice before, but was recently diagnosed with advanced ovarian cancer and chose to live out her remaining days at home, in hospice care. She graduated from Highland Park High School in 1959 and later attended Hendrix College and Southern Methodist University. Her family would like to extend special thanks to Chicago Title's Craig Penfold and Shayla Bell for all of the extra kindness and care they have given our mom over the past year. Betsy was preceded in death by her parents, Elmer T. Gessell & Betty Strickland Gessell of Dallas, TX and her husband Pat Henderson of Presque Isle, Maine; T.W Larkin of Melissa, TX and John Kerr of Fort Worth. TX. She is survived by her son John Kerr Larkin of Dallas; son Scott Kerr Larkin, his wife Gerri Ellen and step-daughter Ryann Adams of Collierville, TN; grandsons Nick Larkin and Chris Larkin of Collierville, TN; grandson Jonathan Larkin, his wife Taylor and their son Koda of Tulsa, OK; daughter Julie Henderson Niehoff and her husband CJ Niehoff of Austin, TX; step-granddaughter Jade Niehoff of Arlington, TX; grandson Calen Niehoff and granddaughter Grace Niehoff of Austin, TX. In lieu of flowers, Betsy asked that we encourage charitable donations in her name to Carry The Load for their Memorial May campaign supporting veterans and their families making the shift from military service to civilian life. She will be laid to rest next to her mother and father at Restland Cemetery in Dallas on Saturday, May 14th. Friends and family are invited to attend a simple graveside memorial at 3pm and all are welcome to join the family for a reception and celebration of life, immediately following the service, at the Richardson Woman's Club, 2005 N. Cliffe, Richardson, TX 75082. Graveside Service for Betsy Gessell Larkin will be Saturday, May 14, 2022 at 3:00 PM in Whispering Waters at Restland Funeral Home. Funeral arrangements for Betsy Gessell Larkin have been faithfully entrusted to Restland Funeral Home and Cemetery, which is located at 13005 Greenville Ave., at the intersection of Restland Road, Dallas, Texas 75243, and can be reached at (972) 238-7111.

Betsy Gessell Larkin, 80, of Dallas, TX, passed away on May 1, 2022 - the 29th anniversary of her father's death. Mother of three, Cookie Grandma to six grandchildren and one great-grandson, she lived 80 years and deserves to be beautifully... View Obituary & Service Information

The family of Betsy Gessell Larkin created this Life Tributes page to make it easy to share your memories.

Send flowers to the Larkin family.