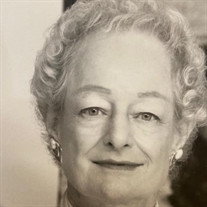 Bette June Hamilton, age 98, passed away on February 2, 2022 in Richardson, Texas. She was born to parents Allen Gordon and Edna Hamilton on March 26, 1923 in Dallas, Texas. Bette leaves his loved ones with unforgettable memories and loving stories. She will be sincerely missed by her loving family, devoted friends, and all the wonderful individuals who knew and loved her. Born St. Paul’s Hospital, Dallas, Texas March 26, 1923. Survived by sister Ruth Hancock of Richardson, TX, Nephew David Robert Hancock of Charlotte, North Carolina (Susan), and Step Niece Suzanne Hudspeth of Dallas, TX, Rosemary Rueckhaus of Albuquerque New Mexico. Bette went to numerous schools in the Midwest and New Orleans, LA.; graduated from North Dallas High School, TX. In 1942, attended Metropolitan Business College, Worked as Secretary-Bookkeeper for Stafford & Son, Automotive Supplies Manufactures, Representatives for ten years. Bette then married Harry G. Hamilton, and their son Scott Allen Hamilton was born September 7, 1952, their only child. When Scott was three (3), Bette went to work part time at the apparel markets on the registration desk for apparel buyers. In 1970, the couple divorced and Bette went to work full time for the Apparel Association, American Fashion Association Inc. in the old Baker Hotel, headquartered on Main Street on Dallas. The association moved to the Dallas Apparel Mart in 1964, when it held its first apparel market. Bette became, Maud Tims, the apparel association’s Manager’s Assistant shortly before Ms. Tims retired, and Bette then became the Association’s Manager, and held that position until her retirement in 2004 at the age of 84. After retirement she enrolled at Northlake Community College, Irving, Texas and took Computer and Conversational Spanish courses. In 2007, her only son, Scott died and she sold her home in Irving, Texas and moved back to Dallas to a Seniors only independent Apartment. After a severe attack of Sciatica in 2009, she moved to Appletree Court Assisted Living in Richardson, Texas in January, 2010 where she lived and where she died on February 2, 2022. Funeral arrangements for Bette June Hamilton have been faithfully entrusted to Restland Funeral Home and Cemetery, which is located at 13005 Greenville Ave., Dallas, TX 75243

Bette June Hamilton, age 98, passed away on February 2, 2022 in Richardson, Texas. She was born to parents Allen Gordon and Edna Hamilton on March 26, 1923 in Dallas, Texas. Bette leaves his loved ones with unforgettable memories and loving... View Obituary & Service Information

The family of Bette June Hamilton created this Life Tributes page to make it easy to share your memories.

Send flowers to the Hamilton family.