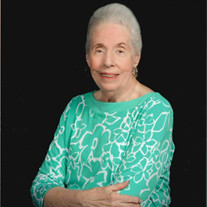 Beverley Brafford Roes died peacefully in her sleep on April 22, 2022, at the age of 87. She was born on February 19, 1935, in Charleston, West Virginia, to Thomas Brinton Brafford and Ruth Hayden Brafford. Beverley had one younger brother, Thomas Brinton Brafford, Junior, who predeceased her. She graduated from Old Trail (High) School in Akron, Ohio. Beverley attended Miami University in Oxford, Ohio, and graduated in 1957 with a degree in Education. She was a member of Kappa Alpha Theta. While at Miami University, Beverley met her husband, Herman John Roes. They were married for forty-two years until his death in 2001. Beverley's teaching career included elementary school positions in Ohio, New Jersey and Texas. She was an excellent teacher and made many lifelong friends along the way. Most recently, she taught at Spring Creek Elementary and Brentfield Elementary in the Richardson Independent School District. While teaching kept her busy, Beverley also took a very active role in the lives of her three daughters. She encouraged their extracurricular activities and participated in many PTAs, including serving as President on two occasions. Beverley loved to travel and had visited many countries around the world. Cruises were her favorite! Beverley travelled to all seven continents. She instilled this love of travel in her daughters and grandchildren. Beverley's hobbies included needlepoint, crochet, reading, Bridge and Mah-Jongg. She was a member of the Arapaho United Methodist Church in Richardson, Texas, where she participated in Church Circle, Dinner Club and mission trips. Beverley spent her last eleven years at Tradition - Prestonwood. There she met her special friend and companion, Bill Walton. They were very happy and fully engaged in all community activities. They made many dear friends among the residents and staff. Beverley's family is very grateful to Bill for his love and support. Her family is also very appreciative of Allstar Hospice and especially Loe Bethell and Maria Berumen. Their kindness, consideration and counsel were invaluable to us in the last months of her life. Beverley is survived by: her three daughters and sons-in-law, Carolyn Roes Walters and Rob Walters, Christy Roes Strock and Dr. Louis Strock and Lisa Roes Karpos and Dr. Philip Karpos; grandchildren Cav Walters and wife Julia, Chris Walters and fiancée Tiphany Reed, Cameron Strock, Callie Strock, Alex Karpos and wife Livia, and Andrew Karpos. A private graveside service will be held at Restland Memorial Park.

Beverley Brafford Roes died peacefully in her sleep on April 22, 2022, at the age of 87. She was born on February 19, 1935, in Charleston, West Virginia, to Thomas Brinton Brafford and Ruth Hayden Brafford. Beverley had one younger brother,... View Obituary & Service Information

The family of Beverley Brafford Roes created this Life Tributes page to make it easy to share your memories.

Beverley Brafford Roes died peacefully in her sleep on April...

Send flowers to the Roes family.