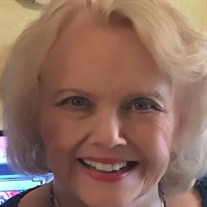 On April 18th, 2022, Beverly Jean Kukal went home to be with our Lord. She is preceded in death by her husband, Ronald Edwin Kukal and her parents, Rodney and Elizabeth Fletcher. Beverly’s fight for life was lost to cancer and Alzheimer’s disease. Beverly was born in Tyler, Texas on November 2nd, 1938. She lived most of her 83 years in Texas. She attended and graduated with honors from Hillcrest High School in Dallas, Texas. She also attended Southern Methodist University and obtained her Associates Degree in Real Estate and Interior Design. She was also a member of the Kappa Kappa Gamma sorority. She became a real estate broker and interior designer for over 50 years in Dallas, Texas. She was doing what the fixer upper shows are doing years before them and was very successful. Her designs were also in the Parade of Homes for several years. Beverly was a Methodist her entire life. She attended Highland Park United Methodist, Custer Road United Methodist, Lovers Lane United Methodist, and First Frisco United Methodist churches in the Dallas metroplex. Her favorite hobbies were sewing and rescuing and owning cats. She loved people and animals and took in many strays of both kinds throughout her life. We shall miss her very much. She is survived by her sister, Linda Travis of Hunt Texas, her daughters, Shannon Griffin and her husband Greg Ball of Aubrey, Texas and Barbie Horner and her husband Ed Murray of Plano, Texas, her grandchildren Yasmine Griffin of Aubrey Texas, Andrew Ball of Aubrey, Texas, Erin and Chris Matheson of Denton, Texas, Molly and Matt Dooley of Denton, Texas, Melissa and Mason Huemmer of Lewisville, Texas, and her great grandchildren, Adeline Matheson of Denton, Texas, Anniyah Dooley and Moies Dooley of Denton, Texas.

On April 18th, 2022, Beverly Jean Kukal went home to be with our Lord. She is preceded in death by her husband, Ronald Edwin Kukal and her parents, Rodney and Elizabeth Fletcher. Beverly&#8217;s fight for life was lost to cancer and Alzheimer&#8217;s... View Obituary & Service Information

The family of Beverly Jean Kukal created this Life Tributes page to make it easy to share your memories.

Send flowers to the Kukal family.