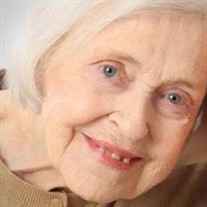 Bobbie Jean Hodge, age 94, of Dallas, Texas passed away peacefully on April 25, 2022 in Allen, Texas. She was born to James Hamilton and Hattie Sydney Knowles on March 21, 1928 in Tulia, Texas. Bobbie attended Texas Tech University and was the second female graduate of the Engineering school. She earned a bachelor's degree in textile engineering, and went on to work for the National Agricultural Testing Laboratory in New York City, and later for Mobile Oil in Dallas, Texas. Bobbie met and married John Ed Hodge in 1965. She retired 2 years later with the birth of her first child, Karen. Bobbie and John welcomed their second daughter, Linda, in 1971. Bobbie was a member of Spring Valley United Methodist Church, the Texas Society for Professional Engineers, the Kappa Alpha Theta sorority, the Aggie Mom's Club, and the PTA. She was a beloved mother, grandmother, sister, wife, cousin, and friend. She loved her family deeply, was a church choir member for over 60 years, and had a terrific group of friends, a.k.a., the "bridge group," with whom she played bridge for over 50 years. She will be fondly remembered by her children, Karen O'Connor (and husband Neil) and Linda Warren (and husband Jeff), and her grandchildren - Jake, Paige, Carson, Kate, and Ryan. Visitation will be held on Thursday, May 5, 2022 from 6:00pm to 8:00pm. The funeral service will take place on Friday, May 6, 2022 at 10:30am at Spring Valley United Methodist Church - 7700 Spring Valley Road, Dallas, Texas 75240. There will be a 1/2hr visitation prior to the service at the same location. Funeral arrangements for Bobbie Jean Hodge have been faithfully entrusted to Restland Funeral Home and Memorial Park - 13005 Greenville Ave., Dallas, Texas 75243. In lieu of flowers, a memorial gift may be made to the Spring Valley United Methodist Church.

Bobbie Jean Hodge, age 94, of Dallas, Texas passed away peacefully on April 25, 2022 in Allen, Texas. She was born to James Hamilton and Hattie Sydney Knowles on March 21, 1928 in Tulia, Texas. Bobbie attended Texas Tech University and was the... View Obituary & Service Information

The family of Bobbie Jean Hodge created this Life Tributes page to make it easy to share your memories.

Send flowers to the Hodge family.