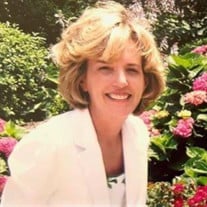 Bonnie Blunt Lannen passed away on January 17, 2022, in Dallas, Texas. She was born on August 8, 1945, to parents John Wallace Blunt and Barbara Buzby Blunt and was raised in Swampscott, Massachusetts, steps away from Preston Beach and a short bike ride to the historic town of Marblehead. She attended Colby Sawyer College in New London, New Hampshire and had a long career as a medical technologist, working for over 30 years in the hematology lab at Baylor University Medical Center in Dallas. Bonnie was a woman of deep and abiding Christian faith and a devoted member of the Episcopal Church of the Incarnation in Dallas. She believed in the value of education and was actively involved in supporting her children’s academic and athletic endeavors at Cistercian Preparatory School and Ursuline Academy of Dallas. Bonnie was ardently self-reliant and unyielding in the face of adversity. She treasured the authentic connections she made with both longtime friends and new acquaintances, and she was dedicated to her pursuits of truth and knowledge. She was a person of dignity, selflessness, and grace. Bonnie is preceded in death by parents John and Barbara Blunt, aunt Willine Sadler, uncles Miles Blunt, Jr., Robert Blunt, Norman Buzby, Jr., Nicholas Buzby, and former spouse Richard M. Lannen. She is survived by son Justin Lannen (Shiela) and daughter Whitney Lannen (Esteban); grandchildren Aidan Lannen, Avery Lannen, Jordan Lannen, Grant Tadayon, and Lila Tadayon; and brothers John W. Blunt II, Miles Blunt (Cynthia), Chris Blunt (Gretchen), and John Irving (Janet). A memorial service will be held Friday, February 11, 2022, at 11:00 a.m. at Church of the Incarnation, 3966 McKinney Ave, Dallas, Texas 75204. Anyone wishing to honor Bonnie’s life is asked to make a gift in her memory to the Austin Street Center in Dallas, Texas.

Bonnie Blunt Lannen passed away on January 17, 2022, in Dallas, Texas. She was born on August 8, 1945, to parents John Wallace Blunt and Barbara Buzby Blunt and was raised in Swampscott, Massachusetts, steps away from Preston Beach and a short... View Obituary & Service Information

The family of Bonnie Blunt Lannen created this Life Tributes page to make it easy to share your memories.

Send flowers to the Lannen family.