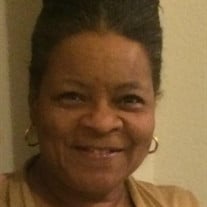 Cecile Laverne Williams-Ward was born December 20, 1952 in Detroit, Michigan to the late Alvin and Darlene Williams. She was affectionately known as Dino to her friends and family and was the oldest of her 10 siblings. Cecile attended Eastern High School in Detroit, Michigan. She graduated in 1970. After graduating from Eastern, she attended Wayne State University. She went on to pursue a career with the State of Michigan where her work ethnic was unparalleled. Cecile worked for the State of Michigan for 35 years until she retired in 2010. In 1977 Cecile married Kelcie Ward. From their union her two beautiful daughters were born, April and Rikita. Her daughters were the pride and joy of her life. She spent many years creating fond memories with them. Cecile was an inspiration to all who knew her. She loved unconditionally. Cecile had a naturally nurturing spirit and was always there for those that were in need. Her pleasant personality was contagious to everyone she met. Cecile always had a smile on her face and depending on her mood a side eye to go along with it. The simplest pleasures in life brought her joy. She enjoyed drawing, reading, a good political debate and traveling. Cecile never missed family birthday dinners and parties. If one of her favorite songs came on she would even hit the dance floor. She looked forward to spending time with her family at the annual family reunions at Belle Isle. Cecile and her mother relocated to Texas, with her daughters and their family to enjoy her retirement. Cecile and her mother were inseparable and often called Thelma & Louise. The two would spend hours sitting outside talking, sipping tea and enjoying the weather. Cecile enjoyed playing games with and taking care of her grand (Dominic, Reign) and great-grandchildren (Kharie, Andre & Khai). She lived life to the fullest traveling all around the country with her family. On January 9, 2022 Cecile left this world behind and heaved gained another angel Cecile leaves to cherish her precious memories and celebrate her life: Two daughters, April Rachal-Burson (Pierre), Rikita Ward-Smith (David); Four Grandchildren, Shawn Rachal, Paris Burson, Dominic Smith and Reign Smith; Four Great-Grandchildren, Kharie, Kaiden, Andre and Khai; Five Sisters, Frieda, Deborah, Regina, Agnes, and Lillian; Three Brothers, Joseph, Alvin and Kareem. Along with a host of many cousins, nieces, nephews, family and friends. A Celebration of Life will be held on Saturday, February 5, 2022 at 2:00pm at the Wildwood Chapel - Restland Memorial Park, 13005 Greenville Ave., Dallas, Texas 75243 To join the service please click the link: http://webcast.funeralvue.com/events/viewer/68605/hash:99CFBE43CA7C8394

Cecile Laverne Williams-Ward was born December 20, 1952 in Detroit, Michigan to the late Alvin and Darlene Williams. She was affectionately known as Dino to her friends and family and was the oldest of her 10 siblings. Cecile attended Eastern... View Obituary & Service Information

The family of Cecile Laverne Williams-Ward created this Life Tributes page to make it easy to share your memories.

Send flowers to the Williams-Ward family.