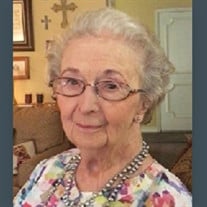 HUSKISSON, Charline "Charlie" Howell Byers Huskisson was a force to be reckoned with all of her sparkling 99 years. Born November 4th, 1921 in Gustine, Texas to Bernice Allen Howell and Ruth Cecia Isham Howell, she went home to be with her Lord and Savior on January 7th, 2021. Having a go get 'em spirit from early on, she graduated from high school at sixteen and later became one of the youngest secretaries in the pool at First National Bank Dallas. She would serve as secretary to the bank president for over forty years, making lifelong friends with her 'bank group girls' along the way. During that time she married Win Byers, becoming a proud Mom to two daughters Beverly and Sharon; in later years she married Carl Huskisson, gaining a stepson Michael; then four grandchildren who christened her "Nonnie", and six great grandchildren. She played tennis and bowled into her seventies. She beat leukemia when they said she wouldn't. She loved to travel with family and friends, setting foot overseas and across the United States including a helicopter trip for her 95th birthday to finally see the Grand Canyon. She volunteered throughout her life, including for many years at Baylor Hospital and weekly at the local food bank. She loved sports and was a lifelong Texas Rangers & Dallas Cowboys fan; she also was a many-faceted college football fan over the years, with appreciation gained for the Sooners from her grandson-in-laws Kirk and Jim, rooting on the Longhorns for her daughter Bev, the Tigers for grandson-in-law Danny, and the Aggies for son-in-law Gordon and several of her great-grandchildren. Christ and church were dear to her. She was a teacher and elder of Rosemont Christian Church in Oak Cliff for decades, and proud member in recent years of East Dallas Christian Church. She made dear friends in retirement in her close-knit community of The Highlands. She drew people like fireflies to her light everywhere she went. The family wishes to express their deepest thanks for the uncountable kindnesses of her friends and of those helping care for her. She is survived by her daughter Beverly Hamilton; stepson Michael Huskisson; son-in-law Robert Chitwood; granddaughters Lisa LeBlanc, Julie Landsaw, and Valerie Chitwood Moser; grandson David Chitwood; nieces and nephews; and six great grandchildren who have had the gift of growing up knowing their great grandmother Nonnie. While we miss her more than there are tears to cry, her faith meant she was welcomed in Heaven by many open arms including her daughter Sharon's, and we smile through our tears at such a homecoming. She ran the good race. Private graveside service with memorial service at a later date. In lieu of flowers, the family asks memorials be sent to East Dallas Christian Church, www.edcc.org, 629 N. Peak St., Dallas TX 75246.

HUSKISSON, Charline "Charlie" Howell Byers Huskisson was a force to be reckoned with all of her sparkling 99 years. Born November 4th, 1921 in Gustine, Texas to Bernice Allen Howell and Ruth Cecia Isham Howell, she went home to be with her Lord... View Obituary & Service Information

The family of Charline Huskisson created this Life Tributes page to make it easy to share your memories.

Send flowers to the Huskisson family.