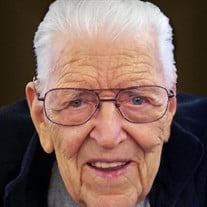 Clarence Gilbert Falke; Beloved husband, father, grandfather, great-grandfather, brother, respected physician and member of the greatest generation, passed away in the early hours of April 14. He was 102 years of age. Preferring to be called, Gilbert, or “Gil” by friends, he lived an extraordinary life of challenge and achievement. Born in Thorndale, TX, of a poor second-generation German immigrant family, he worked first as a delivery boy, farm hand and laborer, then as a shoe salesman and bank teller. His ultimate goal, which might have seemed insurmountable to a less determined young man, was to put himself through medical school and become a doctor. While attending Temple Junior College, he met the love of his life, Theresa Elizabeth Bennett, of Temple. The couple married in 1939, and remained happily so for 66 years, until Theresa’s passing in 2005. She set out to work extra jobs and long hours to help her husband pursue his medical education, but two years later, America entered World War II, and Gilbert had enlisted. Hoping to become a pilot, he enrolled in the Army Air Corps and Officer Candidate School, but a minor deficiency in his peripheral vision meant that an alternative must be chosen if he wanted to fly. So he trained for and was commissioned a navigator bombardier, with the rank of lieutenant. He was assigned to the 319th Bomb Group, which was twice awarded distinguished service citations. Strategic missions sent them to North Africa, the Mediterranean islands, Italy and Germany. Returning from a mission during the Italian Campaign in 1944, Lt. Falke’s Martin B26 Marauder was shot down by German air defenses near the Po river in Northern Italy. He survived the crash landing with minimal injuries, but was severely burned over much of his body when his only escape was through a window over a flaming wing. Burned over 70% of his body, he attempted to find cover in a nearby ditch, but an enemy patrol had seen the crash and took him prisoner “For you the war is over,” said a German soldier as he held a submachine gun to the prone lieutenant’s forehead. After medical treatment in a German hospital, Lt. Falke was transferred to the notorious prison camp, Stalag Luft 7A near Moosburg in southern Bavaria. In starvation conditions, suffering from his injuries and a beating that permanently damaged his liver, he survived nearly a year of such imprisonment, until he and his fellow prisoners were liberated by General George S. Patton and the 3rd Army. One of Lt. Falke’s most cherished memories was being freed and getting to shake the famous general’s hand. Repatriated, his health recovered and and he was able to continue his education. He and his wife began their family with the birth of a son, Terrence, at Brooke Army Medical Center in 1950. In 1952, with a medical degree from the University of Texas Southwestern Medical School, and extra training as a surgeon, he moved his family to Dallas to serve 5 years at the VA hospital on Lancaster Boulevard. During which time, he and Theresa were blessed by the birth of a daughter, Linda. After this, he transferred to Methodist Central Hospital—specializing in general and vascular surgery. He became one of the longest serving physicians in the Methodist system’s history, and was honored several times by his colleagues. Dedicated to emergency care, Dr. Falke worked long hours, usually 7 days per week. After church on Sundays, he would often take his family with him when he made his rounds to visit hospitalized patients. A humble man of modest tastes, he wore inexpensive suits and drove cars until they wore out, and often provided his services for no or a reduced fee. He spent his entire life defending, healing and providing for others. Dr. Falke, a lifelong Lutheran, was first a member of Grace Lutheran Church in Dallas, then the Cross of Christ Lutheran Church in Desoto, TX. He is survived by his two children, Terrence Falke, Linda (Falke) Harris, his granddaughter Summer Haffner, great-grandchildren, Norah and Rory Haffner, and his brother, Raymond Falke, Lt. Col. USAF (Ret.). No public service was held. Dear Lord, hold this cherished man in your arms, grant him the heavenly reward he so richly deserves. May he be reunited with his beloved wife, Theresa, and eventually with those of us who love him so.

Clarence Gilbert Falke; Beloved husband, father, grandfather, great-grandfather, brother, respected physician and member of the greatest generation, passed away in the early hours of April 14. He was 102 years of age. Preferring to be called,... View Obituary & Service Information

The family of Dr. Clarence Gilbert Falke created this Life Tributes page to make it easy to share your memories.

Send flowers to the Falke family.