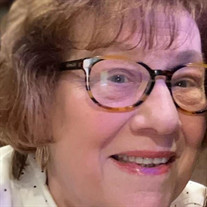 Constance Rogers, age 73, passed away on January 22, 2022, in Richardson, Texas. She was born to Jess and Mildred Atterbury on October 8, 1948, in Dallas, Texas. Connie, as she was affectionally known grew up in North Dallas and graduated from W T White in 1967. She attended East Texas State University for a couple of semesters. She was introduced to Ralph Wayne Rogers by her second cousin in 1968 and they were married June 7, 1969. Their love continued until Ralph passed away November 2,1991. Connie never remarried. Connie is preceded in death by her husband, Ralph Rogers and her parents, Jess and Mildred Atterbury. She will be lovingly remembered by her son, Price Rogers; daughter, Amy Liebrum; brother and sister-in-law, Gary, and Terri Atterbury; granddaughters, Jesse Liebrum, Lane Rogers, Paige Rogers, Reese Rogers; and grandson, Slade Liebrum. Plus, her sister and brother in laws and several nieces and nephews. To the grandkids and their friends, she was Nonnie. Connie was young at heart and loved to be around her grandkids and their friends. She loved being part of their lives. When she could, she would attend sporting events and concerts as their biggest fan. Connie was an avid reader and a huge animal lover. She supported the SPCA with annual donations and posted Lost Animal notices on Facebook doing what she could to reunite lost fur babies with their owners. She also thought it was very important to be civically minded and take part in the privilege of voting in local, State and Federal elections. Connie loved games and was at one time an avid bridge player and she was also part of a monthly Bunco group for over 25 years. She enjoyed reading and music in her down time after retiring from Graphic Product Inc in 2019 where she worked as a bookkeeper for 24 years. Connie was well travelled. She travelled to Europe with her husband Ralph on business when he worked in the Wine industry twice and once more with her daughter Amy after she graduated from college. She also recently organized family trips to Costa Rica and Broken Bow OK., because more than anything Connie wanted to be with her family spending quality time. She was very much the tradition keeper of the family making sure Birthday’s, Easter, Christmas, and Thanksgiving were celebrated with honor and good cheer. Her Thanksgiving roast hen and dressing will be hard to duplicate without her. Connie was a member of First Christian Church in Plano TX where her son and daughter’s families attend as well. Again, being near family was so important to her and sharing and imparting her faith to her children and grandkids was a number one priority. The bottom line is, she will be sorely missed and leaves her loved ones with wonderful memories and unforgettable stories. Visitation will be held on Wednesday, February 16, 2022 from 4:00pm to 6:00pm at Restland Funeral Home - 13005 Greenville Ave., Dallas, Texas 75243. The funeral service will be held on Thursday, February 17, 2022 at 11:00am at First Christian Church - 813 E 15th St., Plano, Texas 75074. Funeral arrangements for Constance Rogers have been faithfully entrusted to Restland Funeral Home and Memorial Park. In lieu of flowers please send donations to the SPCA and St Jude Cancer Research

Constance Rogers, age 73, passed away on January 22, 2022, in Richardson, Texas. She was born to Jess and Mildred Atterbury on October 8, 1948, in Dallas, Texas. Connie, as she was affectionally known grew up in North Dallas and graduated from... View Obituary & Service Information

The family of Constance "Connie" Rogers created this Life Tributes page to make it easy to share your memories.

Send flowers to the Rogers family.