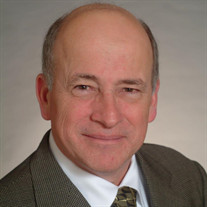 Donald Ray Herring, 74, of Plano, Texas, passed away Saturday, April 2, 2022, after a seemingly short battle with Glioblastoma. Don was born November 27, 1947, in Shreveport, Louisiana to Herbert and Vivian Herring. He would always joke that he got to Texas as soon as he could as his family moved to Fort Worth when he was less than 4 months old. He was the youngest of 3 children: brother David Herring (Judy) and sister Carolyn Horton (Troy). Don grew up in Fort Worth attending Fort Worth Technical (Trimble Tech) High School where he graduated as Salutatorian of his class in 1966. After graduating, he went to Texas Tech. He was only there for one semester before he came back to Fort Worth to marry his childhood sweetheart, Brenda Watkins, on June 16, 1967. He met Brenda at Wichita Street Baptist Church as a young teenager and she was the love of his life. Don continued his education at Arlington State College, but in 1970, he was laid off from General Dynamics and needed to find a job and was unable to complete his degree. He answered an ad to sell cars at John Popel Oldsmobile, only planning on staying until something better came along. However, Don quickly developed a passion for the car business and enjoyed a successful 50+ years in the field. In 1979, God led Don to Lyle Ozmun Volkswagen in Dallas, only to eventually buy out Lyle Ozmun in 1985. He then went on to purchase his first Mitsubishi store in Dallas in 1988, followed by his second, now located in Plano, in 1996, and the Irving location in 2005. Lyle Ozmun was not only his business partner and mentor in business, he was also his mentor in life. Mr. Ozumn introduced Don to the Brother Bible Study which helped Don grow his faith. First and foremost, Don was a devoted Christian with a deep faith in the Lord. He wanted everyone to have a relationship with our Heavenly Father. He led by example, not by words. Don had an infectious smile that immediately made people feel welcomed. He made decisions not only based on what was best for him and his family, but what he felt would also be best for everyone he worked with. He felt a deep responsibility for how his decisions would affect other people and always trusted that God would provide. Don was a doting husband, a supportive father, a mentor, businessman and a civic leader. He would be embarrassed if we listed all his accomplishments because he was a very humble man. Of all the many roles and titles he had, his favorite was being “Buddy” to his 6 grandchildren. Many Sunday afternoons were spent with all 6 grandkids playing in the pool or challenging their Buddy to a game of chess or Skipbo. Don was preceded in death by his parents, his sister-in-law, Janice Lambert, and his mentor and business partner, Lyle Ozmun. He is survived by his wife of almost 55 years, Brenda Herring, his children: Don Herring, Jr. (Stacy), Sherri Herring, Jamie Marstaller (Cody), and grandchildren: Allison Herring, Andrew Herring, Braden Hawkins, Brynn Hawkins, Grayson Marstaller and Landry Marstaller. He is also survived by his brother, sister and many cousins, nieces, and nephews that he loved dearly. A viewing will be held at Restland Funeral Home Chapel on Greenville Avenue in Dallas, Texas at 9:00 AM on Tuesday, April 12, 2022. Funeral Services will be immediately following at 10:00 AM. The family would like to thank T Boone Pickens Faith Presbyterian Hospice for their gracious care of our dear Husband, Father , Brother, Uncle and friend. In lieu of flowers, donations can be made to Faith Presbyterian Hospice https://www.faithpreshospice.org/ or Glioblastoma Foundation https://glioblastomafoundation.org

Donald Ray Herring, 74, of Plano, Texas, passed away Saturday, April 2, 2022, after a seemingly short battle with Glioblastoma. Don was born November 27, 1947, in Shreveport, Louisiana to Herbert and Vivian Herring. He would always joke that... View Obituary & Service Information

The family of Donald Ray Herring created this Life Tributes page to make it easy to share your memories.

Send flowers to the Herring family.