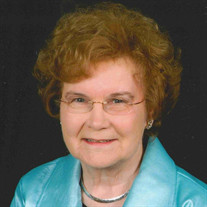 Dorothy LaJean Breland Johnson, known as Jean, passed away peacefully at her home with her husband by her side on Sunday morning, March 27, 2022, after a seven year battle with several health issues. Jean celebrated her 88th birthday on February 19, 2022. Jean was born in Philadelphia, Mississippi and was the second child of Rev. John R. Breland and wife Mary Jewell Pennington Breland. When Jean was three years old, the family moved to Louisiana where her dad was pastor of the historic First Baptist Church of Jackson. Jean and her family became Texans when Jen was five years old. Her dad served churches in Tenaha, Kirbyville, Liberty and Beaumont. She was very active in church activities, and she loved serving Jesus. She was baptized by her father when she accepted Jesus as her Lord and Savior, in Kirbyville, Texas. She finished high school in Beaumont. Music was an important part of Jean’s growing up years. She was the church organist and spent many hours practicing. After high school, Jean entered Baylor University where she received her Bachelor of Arts degree in education. Her first few years of teaching were in La Marque and Texas City. During this time, she commuted to the University of Houston where she received her Master of Education degree. Her dad was chaplain of John Sealy Hospital at the time of the 1962 hurricane Carla, so they spent the storm at the hospital watching the cars on the street go under water. Jean was to have played the organ at the First Baptist Church of Texas City that Sunday, but there was no organ left to be played. The schools were closed for a whole month after the storm. When teachers were allowed back in the classrooms, there was six inches of mud on the floor and snakes in the bookshelves. After the storm, Jean decided to move to higher ground. In 1962 she started teaching in Richardson and met her future husband Dennis Johnson, on a blind date. He was a teacher and coach at Richardson High School. On August 3, 1963, Dennis and Jean were married at First Baptist Church of Liberty, Texas where her father officiated their wedding ceremony. Jean began teaching elementary school in the Richardson ISD in 1962. She loved teaching first graders at Mohawk Elementary for 28 years. Dennis and Jean were blessed with a son in 1964 and a daughter in 1967. They celebrated at the marriages of their children and were later overjoyed to add two granddaughters to the family. Jean was an active member of the First Baptist Church of Richardson where she enjoyed friends in the Fellowship Sunday School Class. She also enjoyed actives with the Richardson Woman’s Club, and her sorority, Alpha Delta Kappa. She was a lifetime member of the Texas PTA. She received many awards during her teaching career, but most importantly, she treasured the relationships that she established with her students and their families. She also enjoyed hosting luncheons in her home for many beloved friends. Jean was preceded in death by her parents: Rev. John R. Breland and Mary Jewell Pennington Breland. She is survived by her husband, Dennis Gayle Johnson of Richardson, Texas; son, Darrin Gayle Johnson and his wife Terri of Plano, Texas; daughter, Darby Jean Harding and her husband Don of Richardson; granddaughters, Rachel Johnson and Sarah Johnson of Plano, Texas; brother, Dr. John H. Breland and his wife Jule Breland of Columbia, South Carolina; niece, Julie Jagmin and her husband Lance and their daughter Julia Kathryn of Athens, Georgia; niece Lee Foster and her husband Jim and their daughter Breland of Greenville, South Carolina. In lieu of flowers, donations may be made in Jean’s honor to First Baptist Church of Richardson or an organization of your choice.

Dorothy LaJean Breland Johnson, known as Jean, passed away peacefully at her home with her husband by her side on Sunday morning, March 27, 2022, after a seven year battle with several health issues. Jean celebrated her 88th birthday on February... View Obituary & Service Information

The family of Dorothy "Jean" Johnson created this Life Tributes page to make it easy to share your memories.