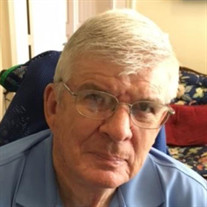 Earl Robert Daigle was born on April 11, 1937, to DA (Jack) and Myrtle Daigle in Port Arthur, TX and met Jesus on January 21, 2022. Earl was a graduate of Thomas Jefferson High School in Port Arthur, TX. He went on to graduate in 1960 from SMU in Dallas, TX with a BS in Geology. After a brief stent at Lone Star Gas, he joined the Army and rose to the rank of Sgt. First Class. He met his wife of 62 years, Ceicillia (Ceil) Hunter in Jr. High School in Port Arthur, TX. They were married on April 16, 1960 in Port Arthur, TX at St. Paul Lutheran Church. After being honorably discharged from the Army, Earl took a job at US Envelope in Dallas, TX. He spent the next 37 years (his entire career) at US Envelope (later became Westvaco) before retiring in 1997. Earl was active coaching his boys in youth baseball, Scouting and taking them hunting and fishing. He could always be found sitting in the bleachers in his suit and tie watching his boys play football, baseball and soccer. After retirement he and Ceil enjoyed traveling with numerous high school friends and their spouses. He also enjoyed swimming, exercising and hanging out with his YMCA friends. In his spare time Earl volunteered at North Dallas Shared Ministries helping to prepare taxes and served in various other roles. He was diagnosed with MS in his early 40's and battled the disease for the next 45 years overcoming many physical challenges to live a fruitful life. Earl is preceded in death by his parents, DA (Jack) and Myrtle Daigle. He will be lovingly remembered by his wife, Ceicillia (Ceil) H Daigle; son, Todd Hunter Daigle and his wife Kathy of Evergreen, CO; son, Thad Robert Daigle and his wife Allison of Flower Mound, TX; and sister, Sybil Baker of Port Neches, TX. Also, to cherish his memory will be grandchildren: Hannah, Kathleen and Rebecca Daigle; as well as, Brittany Ziegler Bowen and Chad Edenfield. His memory will also live on in great grandchildren, Ava Ziegler and Knoxx Bowen. In lieu of flowers, please consider making a donation to either: Holy Cross Lutheran Church: 11425 Marsh Ln., Dallas, TX www.hcdallas.org/giving MS Society: www.nationalmssociety.org

Earl Robert Daigle was born on April 11, 1937, to DA (Jack) and Myrtle Daigle in Port Arthur, TX and met Jesus on January 21, 2022. Earl was a graduate of Thomas Jefferson High School in Port Arthur, TX. He went on to graduate in 1960 from SMU... View Obituary & Service Information

The family of Earl Robert Daigle created this Life Tributes page to make it easy to share your memories.