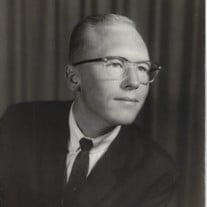 Earl Wade Harris, born February 14, 1938, went to be with the Lord March 5, 2022 at the age of 84 years old. Earl was born in Dallas, TX. to Elizabeth Eva Harris and Lester Ray Harris. He had one brother Thomas Ray Harris. Earl had 3 daughters: Debbie Marie Spence, Linda Ann Parent, and Kimberly Renea Moncibaiz. Earl had 7 grandchildren: Tracy Mulligan, Danielle Garvin, Lauren Martin, Ashlee Dunlap, Ryan Weber, Kaytlin Moncibaiz, and Brenden Moncibaiz. He had 11 great grandchildren. Earl is survived by his brother and his daughters, grandchildren and great- grandchildren. Much of his youth and as a young adult he went by Wade. Earl was a proud member of the US Marine Corps for over 20 years. During the Vietnam war, he served 2 tours overseas as head of supply and an Ontos Commander. Earl trained Marines for severe cold weather and survival methods at Pickle Meadows Mountain Training Center. He was able to travel many places with the Marine Corps, but Okinawa always held a special place in his heart. He was able to speak Japanese fluently. At retirement, he was Staff Sergeant Earl Wade Harris. For a short time, Earl traveled around Texas selling decorative mirrors, then went on to a 25 year career with the Dallas Morning News delivering newspapers. While serving in the Marines, Earl participated in the martial arts program. He was a member of the Marine Corps football team which practiced against the San Francisco 49ers. (Just want to note here Earl was an avid Dallas Cowboys fan). He was an excellent roller skater and part of a roller derby league in San Francisco. As life slowed down, he enjoyed tinkering with his many aquariums and providing a good life for all his fish. Earl was a devoted father and loved his daughters very much. He would be there at the drop of a hat whenever they needed anything. His generosity was not limited to his girls, he would help anyone in need. Earl became a devoted follower of Christ in his later years, serving the Lord at Oak Grove Baptist Church. Services for Earl will be held Thursday April 7, 2022 at Oak Grove Baptist Church, 2505 Haymarket Rd, Dallas, TX 75253. The viewing will be at 10 a.m. and the funeral service will start at 11 a.m. He will be laid to rest at DFW National Cemetery, 2000 Mountain Creek Pkwy, Dallas, TX 75211 at 2 p.m. Funeral arrangements for Earl Wade Harris have been faithfully entrusted to Restland Funeral Home and Cemetery, which is located at 13005 Greenville Ave., at the intersection of Restland Road, Dallas, Texas 75243, and can be reached at (972) 238-7111. View Tribute Slideshow Here: https://www.tributeslides.com/tributes/show/ZNC7Y2CPGXHJ5L4K

Earl Wade Harris, born February 14, 1938, went to be with the Lord March 5, 2022 at the age of 84 years old. Earl was born in Dallas, TX. to Elizabeth Eva Harris and Lester Ray Harris. He had one brother Thomas Ray Harris. Earl had 3 daughters:... View Obituary & Service Information

The family of Earl Wade Harris created this Life Tributes page to make it easy to share your memories.

Send flowers to the Harris family.