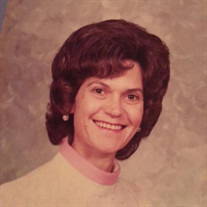 Earlene Joy Whitaker, beloved sweetie, momma, maw, sister-in-law, aunt, and treasured friend to many went to her heavenly home on Tuesday, April 12, 2022 in Garland, Texas. Earlene was born on April 27, 1934, in Brady, Texas to George and Ada Joy. She and her twin sister Pearlene were numbers 6 and 7 in a litter of 8. Earlene was a graduate of Brady High School, Class of 1952. Shortly after graduation, during the Korean War, the twins headed to Brownwood to join the Army. Their brother, Rollie, who was in command of the recruiting office, promptly sent then back home with a strong brotherly message of “not today”! At 19 years old, Earlene met the love of her life, Joe Whitaker, an older man of 26. Joe had concerns about their age difference, but that did not stand in the way of 68 years of wedded bliss. After struggling to have children, they were blessed with a son, Barrett, and twin sons, Terry, and Garry. Though she was small in stature, Earlene possessed great strength, spiritual, physical, and emotional. She experienced great losses and serious illnesses throughout her life. She miscarried, lost infant twins shortly after their birth, and endured the death of her parents and all her siblings. She successfully weathered many illnesses, the most recent being stage 4 lung cancer that had metastasized. Her strong will to thrive led her on a 4-year journey of monthly treatments. When the doctors would ask if she wanted to go forward with treatments, her response would be, “whatever I need to do to live”. Earlene was very intelligent and a dedicated worker. Earlene’s first job after moving to Garland, was the local pickle factory, where she worked on an assembly line poking pickles into jars, which made her nauseous. Soon after that, she went to work for LTV. Her first day on the job, she passed the test and become a certified welder. She welded bombs, which were being used in the Vietnam War. Then she set in for the long haul at Varo Semiconductors, which through multiple ownership changes later became Litton. Earlene spent most of her working career producing various pieces of military equipment, the latest being night vision goggles used during the First Gulf War. Just before retirement, the goggles were being returned for repairs, and she received one that included a note from a British soldier, with the message, “thanks Yank”. Earlene made friends at work that would remain close to her the rest of her life. Earlene was very proud of Barrett. He was the apple of her eye! She was never disappointed in him, not even once. He married Jackie when he was 21. They had been married for 13 years, and one evening they went to see Earlene and Joe. Barry, as she called him, said “Jackie is pregnant!” Earlene jumped off the couch, hugged Jackie, and declared “we are going to be called, Maw and Paw!” And they were. She was a great Maw to Joseph. She took him to the Heard Museum on a regular basis. They went to the State Fair of Texas. She took him for several years to Christmas on the Square in Garland. They went to Brady, just the two of them. They were two peas in a pod! Buddies! Pals! Earlene and Joe moved to Clear Lake to enjoy their retirement. Earlene loved everything about the lake house. She loved planting flowers, watching the hummingbirds and butterflies, and drinking her coffee on the deck while watching the boats on the water. She never sat still for long. She was always busy. Earlene had several cats and dogs throughout her retirement years. The perfect fit for them, was their last dog named Sasha. Joseph loved the lake house too. He and Maw had many memory making adventures there. During their years at Clear Lake, they were members of First Baptist Church in Branch. They enjoyed Sunday school classes, bible studies, worship, gospel singings, fellowship, and many close friends. Their memories of the time spent at First Baptist Church in Branch were priceless. Though they needed to move to Garland for health reasons, the friendships established in that little church in Branch remained strong. Joseph married Sierra when he was 23. They later had Hazel and Benjamin. Maw was so excited! Her and Hazel were close from day 1! They ate cashews together, put on lotion, colored, and played games. Maw had a kid’s corner at her house with special toys for Hazel and Benjamin. Earlene is preceded in death by her parents; George and Ada Joy; sons, Terry, and Garry; brothers, Arthur, Rollie, Harmon, Bobby Wayne, and Infant Joy; sisters, Georgia Marshall, and Pearlene Gamel; brothers-in-law, Polly Marshall and Jerry Gamel; sisters-in-law, Ollie, Doris and Ethel; niece, Joy Fay Taylor; great niece, Lillie Joy Gamel; great nephew, Dewey Stockbridge, and many family members and loved ones. She is survived by her husband, Joe; son, Barrett; daughter in law, Jackie; grandson, Joseph (Sierra); great granddaughter, Hazel; great grandson, Benjamin; nieces, nephews and a host of family, friends and loved ones. Those who knew her, loved her. She was known for her strength, positive attitude, and her love for God, family, and country. Family and friends are invited to a graveside service on Monday, April 18, 2022 at 2:00pm at Restland Funeral Home, 13005 Greenville Ave, Dallas, Texas 75243. Interment will be in the Court of Meditation, closest to the North entrance on Greenville.

The family of Earlene Joy Whitaker created this Life Tributes page to make it easy to share your memories.

Send flowers to the Whitaker family.