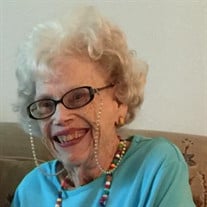 Elizabeth Lowman, 92, of Allen, Texas passed away on May 23, 2020 in Celina, Texas of natural causes. She was born on July 14, 1927 to George M. and Pearl E. Patch in Orlando, Florida. She married Robert E. Lowman on August 19, 1949 in Baton Rouge, Louisiana. She was a devoted mother and substitute teacher. Elizabeth graduated from LSU where she was a member of Tri Delta Sorority. She was a volunteer for the First United Methodist Church of Allen, Texas, where she played the piano and was the first Choir Director for the church. She became a member of the Owl Club of McKinney, Texas in 1984. She was a Cub and Boy Scout leader, a Brownie Leader and volunteered in many capacities in Allen's community. She had a love for history. She and her husband moved to Maine for their retirement years. Upon the passing of Robert in 1986 Elizabeth relocated to Plano, Texas where she became a volunteer for Medical City hospital for 20 years. After a stroke and other health issues, she moved to assisted living where she would live out her life. Elizabeth's joy was her family, the more the merrier. Elizabeth is survived by her daughters, Carol Lowman McQuagge (James), and Janna Lowman Cobb (Lee); sons, Michael Lowman (Claudie), and Gary Lowman (Karen); nieces, Sharon Hermann and Beth Butterworth of Atlanta, Georgia, 9 grandchildren, and 12 great grandchildren. She was preceded in death by her husband, Robert E. Lowman; parents, George M. and Pearl E. Patch; In-laws, Alva E. and Bernice G. Lowman; sister and brother in-law, Dorothy A. and Joseph F. Butterworth. A private graveside service will be held May 29, 2020 at Restland Cemetery, Dallas, Texas. A memorial service will be held at a later date. Memorials may be made to First United Methodist Church 601 S. Greenville Ave., Allen, Texas 75002

The family of Elizabeth Patch Lowman created this Life Tributes page to make it easy to share your memories.

Send flowers to the Lowman family.