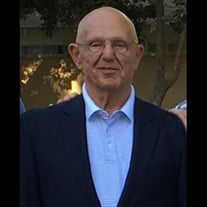 Evans Kostas of Plano, Texas passed away at his home, surrounded by family on Wednesday, October 20, 2021, at the age of 86. Evans is preceded by his wife of nearly forty years, Janet, and siblings Teddy (Schick), Chuck and Sylvia (Chicouris). He is survived by his sisters Penny Magglos and Zoe Zakovec. He is also survived by his children Lauren and her husband Jon Nuckles, Ellen and her husband Dave Fox, James and his wife Diana, Karen and her husband William Hudson, John and his wife Stacey, and Andrew and his wife Amanda. He is survived by his grandchildren Ben Nuckles; Andrew, Will, John and Luke Fox; Alex, Christopher and James Kostas; Grace and Henry Hudson; Christina and Nicholas Kostas; and Anna and Louis Kostas. Evans was born on January 13, 1935, in Chicago to James and Christina (Tavoulare) Kostas. A graduate of the Illinois Institute of Technology and recipient of an Executive MBA from the University of Chicago, Evans had a long career as an engineer and then as an executive, serving as CEO and Chairman of the Board for the publicly traded King Press Corporation at his retirement. Evans was a family man first, loving nothing more than gathering them for dinner and an evening of jokes. Like a true Texan, he was a fan of “Waylon, and Willie and the boys.” He was an accomplished private pilot who was well known in the small cafes in the tiny airports around the Texas countryside. An avid golfer, Evans had a swing that was unforgettable. His love for Janet and his care for her during her illness was inspiring in its tenderness. Evans regularly shared how grateful he was for his family and his life. There is a small, private service on Wednesday, October 27 at Holy Trinity Greek Orthodox Church in Dallas, Texas. In lieu of flowers, the family asks you to consider a donation in memory of Evans to the Muscular Dystrophy Association at https://mda.donordrive.com/campaign/Evans-Kostas . Evans’ grandson Henry is living with Duchenne Muscular Dystrophy. The link to the livestream of the service is available at https://m.youtube.com/watch?v=ylT1jyJE4d4&feature=youtu.be. Evans’ memory will live on in the stories the family will tell for many generations.

Evans Kostas of Plano, Texas passed away at his home, surrounded by family on Wednesday, October 20, 2021, at the age of 86. Evans is preceded by his wife of nearly forty years, Janet, and siblings Teddy (Schick), Chuck and Sylvia (Chicouris).... View Obituary & Service Information

The family of Evans Kostas created this Life Tributes page to make it easy to share your memories.

Evans Kostas of Plano, Texas passed away at his home, surrounded...