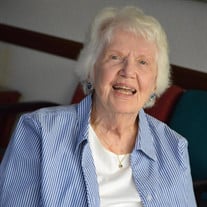 Mothers teach us to love, to see beauty, to take our place in the world, and bloom there. Our Mother was that special kind of woman. She lived an inspiring life, raised a wonderful family, had a beautiful heart for the Lord, and for people. Her family was everything to her and she was everything to us. She was born Frances Elaine Eason on September 3, 1925, to Francis and Flor­ence Eason in New Orleans, Louisiana. Frances graduated from McDonogh High School where she served as Secretary of the Senior class, sang in the choir, and performed in several theater productions. After high school, she attended a Secretarial college, which led to a position as the Executive Secretary to the Publicity editor of the New Orleans Times Picayune. In the spring of 1943, she met a young twenty-year-old Merchant Marine Academy Lieutenant from Dallas, Texas, Arlie H. Franklin, who always claimed, "He fell in love with Frances the day they met." They were married on April 4,1945 and moved to Dallas, where they raised their two children. Arlie passed away in 1986 after forty-one years of mar­riage. Frances was a true Southern beauty, known for her impeccable sense of style and charms. She enjoyed playing bridge for the "fellowship" as she like to say. She was an avid reader and enjoyed her membership of The Tuesday Book Club, Plano and the Hanover-White Current and Classic Book Club, Dallas. Frances served in many areas of her church in Dallas, St. John's Episcopal. She was a member of the Vestry, head of the Alter Guild, and created and managed the church gift shop. Frances was also a volunteer at Doctor's Hospital in Dallas. She was employed by DISD as a secretary at Edward Titche Elementary for eight years, retiring in 1973. Frances loved the Texas Rangers, a passion she shared with her son, David. She was also a huge Dallas Cowboy fan. She supported both teams no matter their wins or loses! Frances is survived by her daughter, Susan Boone of Plano and her son, David Franklin and his wife, Teresa of Mansfield. She is also survived by six grandchil­dren, Christopher Franklin and wife, Tiffany of Dallas, Lauren Franklin Braun and husband, Ryan of Houston, Justin Davis and wife, Marivel of Double Oak, Aaron Davis and wife, Amanda of Rockwall, Marcus Boone and wife, Lisa of Austin, and Sarah Boone of Dallas. Frances is also survived by ten great grandchildren, Lincoln and Easton Franklin, Ellis Braun, Ava, Marshall, and Brooke Davis, Brady and Sheldyn Davis as well as a new arrival in April. Frances was so loved by her family and friends. We will miss her beautiful smile, her sense of humor, and concern for others. A communion service will be con­ducted for Frances on February 19, 2022, at 1:00 with a reception to follow in the Parrish Hall at St. John's Episcopal Church, 848 Harter Rd, Dallas, 75218 with an interment to follow at Restland Memorial Cemetery, Dallas. Memorials can be made in her name to St. John's Episcopal Church, 848 Harte Rd, Dallas, 75218.

Mothers teach us to love, to see beauty, to take our place in the world, and bloom there. Our Mother was that special kind of woman. She lived an inspiring life, raised a wonderful family, had a beautiful heart for the Lord, and for people.... View Obituary & Service Information

The family of Frances Elaine Franklin created this Life Tributes page to make it easy to share your memories.

Mothers teach us to love, to see beauty, to take our place in...

Send flowers to the Franklin family.