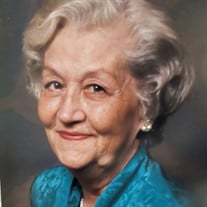 The youngest of three daughters, Frederica Ann Wells was born February 15, 1927 in Gloversville, New York to Michael and Ruth Haban. Raised in Johnstown, New York, “Fritzy” as she was affectionately called during her teenage years, spent her youth involved in sports, theatre and music. A recognized big band jazz singer, Fritzanne toured with her band as the lead singer during World War II to promote and raise money for war bonds. She was a member of the “Daughters of the American Revolution” (DAR), an avid tennis player, a PTA mom and loving mother to six (6) children. She was also a devoted wife to Richard Kelly Wells for thirty seven (37) years prior to his death. Her later years were spent reading, knitting, writing poetry and counseling her children and grandchildren. She loved dogs, was a crossword puzzle enthusiast and die-hard sports fan—especially football. Fritzanne is survived by five of her children, Kathleen Leos, Ric Wells, Colleen Coil and Son In Law Pat, William K. Wells and Daughter In Law Shannon, Michael Wells and Daughter In Law Mayhi. She is preceded in death by her husband Richard Kelly Wells and son Shawn William Wells. Her strong legacy of family and love will continue throughout her 16 adoring grandchildren and 23 great grandchildren. By word and by deed she lived a life personified by unconditional love. She lived her life as the good Lord so commanded in John 13:34–“Love one another. As i have loved you, so you must love one another. By this all men will know that you are my disciples, if you love one another.” Funeral Service will be Monday, May 2, 2022 at 2:00 PM in the Wildwood Chapel at Restland Funeral Home. Funeral arrangements for Frederica Ann Wells have been faithfully entrusted to Restland Funeral Home and Cemetery, which is located at 13005 Greenville Ave., at the intersection of Restland Road, Dallas, Texas 75243, and can be reached at (972) 238-7111.

The youngest of three daughters, Frederica Ann Wells was born February 15, 1927 in Gloversville, New York to Michael and Ruth Haban. Raised in Johnstown, New York, &#8220;Fritzy&#8221; as she was affectionately called during her teenage years,... View Obituary & Service Information

The family of Frederica Ann Wells created this Life Tributes page to make it easy to share your memories.

The youngest of three daughters, Frederica Ann Wells was born...

Send flowers to the Wells family.