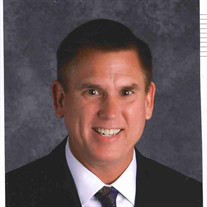 Guy Kevin Lyons 1961-2022 Kevin was born in Dallas, Texas on January 19, 1961 to Guy Lewis Lyons, Jr. and Elizabeth Ann Pittman Lyons. Husband, father, teacher, principal, and friend, he passed away in Richardson, Texas on March 15, 2022. Kevin attended Richardson High School, graduating in 1979. He then attended Baylor University in Waco, TX earning a bachelor's degree in music education in 1983 and later earning his master's and doctorate degrees from Texas A&M Commerce in educational administration. In 1978 Kevin met and began a 44-year relationship with his future wife Carole Sue Burns. Kevin and Carole were married in December 1986 at First United Methodist Church in Dallas, Texas. Together Kevin and Carole raised two sons, Nathan and Matthew. They enjoyed many family traditions, trips, baseball games, music and scouting activities. In 1983 Kevin began his 38-year career in education as a band director for 20 years and continued as an educational administrator for 18 years. He worked in Klein ISO, Richardson ISO, Mesquite ISO, and Plano ISO and impacted many student's lives. Kevin was a volunteer, outdoorsman, cook, musician, and car enthusiast. Kevin is survived by his wife of 36 years, Carole, sons Nathan and Matthew (Kayla) Lyons, sisters Beverly Lyons and Cindy Anderson, brother Keith (Barbara) Lyons, sister and brother in law Cheryl and David Lawrence, and many nieces and nephews. A Service for Guy Kevin Lyons will be Wednesday, March 23, 2022 at 2:00 PM in the Memorial Chapel at Restland Funeral Home. Funeral arrangements for Guy Kevin Lyons have been faithfully entrusted to Restland Funeral Home and Cemetery, which is located at 13005 Greenville Ave., at the intersection of Restland Road, Dallas, Texas 75243, and can be reached at (972) 238-7111. To view a livestream of the service. please follow the link below: https://webcast.funeralvue.com/events/viewer/71345

The family of Guy Kevin Lyons created this Life Tributes page to make it easy to share your memories.

Kevin was born in Dallas, Texas on...

Send flowers to the Lyons family.