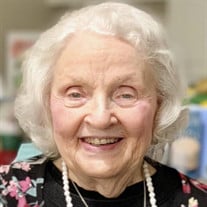 Helen Mills was born on September 24, 1929 in Oklahoma City, Oklahoma. She graduated from Capitol Hill High School in Oklahoma City. She was a member of the Masonic youth service organization the International Order of the Rainbow for Girls and continued as an adult to become a member of the Order of the Eastern Star. She married Judson Eugene Mills on July 19, 1946. Throughout their lives together, she shared in his ministry through music, moving with him from Southwest Baptist Church in Oklahoma City to Dallas, Texas, to join Maple Lawn/Marsh Lane Baptist Church where he was the Music Director from 1959 until 1975. She was always by his side and singing God’s glory in his choirs and special music performances as Gene became Assistant Pastor and Minister of Music at Bruton Road Baptist Church until his retirement from Cornerstone Baptist Church of Mesquite. Helen was a dedicated civil servant, who worked in several different federal agencies and roles throughout her career from Tinker Air Force Base to the Social Security Administration. She found purpose and satisfaction ensuring that families received all of the benefits and support available to them. Helen also deeply valued education and took pride in being able to provide for her daughter’s academic pursuits through college and graduate school. She was devoted to her family, her mother and siblings, her husband, and particularly her daughter, grandchildren, and her great-grandchildren. Helen made friends wherever she went, and enjoyed socializing at the lake, at Belmont Village, Caruth Haven Court, and at Christian Care Centers in Mesquite and Allen. She is preceded in death by her parents, Carl Clark and Grace Jefferson Clark, her brothers Herbert Wilson and William Walter Clark, sister Sybil Wilson, and by her beloved husband of seventy-two years, Judson Eugene Mills. Helen passed peacefully, surrounded by her loving family on April 10, 2022. She is survived by her brother John Carlisle Clark, her daughter Ruegena Graham, granddaughter Stacy Graham-O’Connell and her husband Matthew, grandson Reggie Graham, and her great-grandchildren Rafe Graham, and Henry, Nathaniel, and Beatrice O’Connell. She will be fondly remembered and dearly missed. We love you all the stars and to the moon and back.

Helen Mills was born on September 24, 1929 in Oklahoma City, Oklahoma. She graduated from Capitol Hill High School in Oklahoma City. She was a member of the Masonic youth service organization the International Order of the Rainbow for Girls... View Obituary & Service Information

The family of Helen D Mills created this Life Tributes page to make it easy to share your memories.

Send flowers to the Mills family.