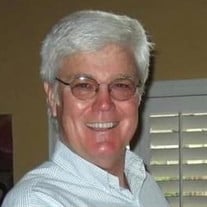 Howard Walter Davis, Jr. left this world just after midnight on May 23, 2020, the result of a pulmonary embolism. He was born in Thomasville, GA on October 19, 1945 to Dorothy Byrom and Howard Davis Sr. Howard moved around the world with his stepfather Ret. Lt. Cl. William (Bill) Byrom and his mom. Moving so often gave him the gift of making friends quickly, which served him well throughout his life. He graduated from Middletown High School in Pennsylvania and went on to get an undergraduate degree and MBA from UCLA. Los Angeles in the 60s allowed him to indulge in his lifelong love of rock ‘n roll by seeing bands like the Doors, the Byrds and Jackson Browne. After graduation, he began working in the marketing department at American Airlines in Dallas, TX. As the story goes, he was friends with the HR person in charge of flight attendants. He would play the lonely bachelor and get set up on blind dates. That only lasted until he met Sharon Getchell, and 48 years later, he still felt like he was the luckiest man alive to have found her. Sharon and Howard were married on April 8, 1972. Howard started working in the account management department of Tracy-Locke Advertising in 1973, quickly working his way up. He was named President in 1981 at the age of 36, the youngest president of a national agency at the time. In 1974 they welcomed their son, Blake James. They welcomed their daughter, Laurel Elizabeth, in 1978. He took more pride in being a dad than any successes he achieved at work. He loved them fiercely and doted on them every chance he had. On January 29, 1991, they lost their son in a car accident. Howard was never quite the same. The ferocity in which he loved his son turned into an overwhelming grief. With his wife’s unwavering love and devotion and the love of his wonderful friends, he fought to come to back to a life filled with meaning and joy. In the mountains of Montana, he found peace and solace. He passionately learned to fly fish and bird hunt with his loyal dogs. These new pursuits brought new friends wherever he went in pursuit of a bird, a trout or a tarpon. He felt blessed when he gained his son-in-law, Thomas “Dudley” Simmons III in June 2005. Howard and Dudley would talk mountaineering, skiing, fishing and hunting together. Thank goodness Laurel married an outdoorsman! Howard became a proud grandfather with the birth of Caroline Blake, born in 2007. To say she brought a new and lasting sense of purpose and happiness is an understatement. That is true with the subsequent births of his grandsons, Thomas and Maclean. He loved getting on the floor with them to play whatever they wanted. He taught them how to cast a fly rod, among other outdoor fun and games every summer in Montana. He never missed the chance to tell them how proud he was of them and how much he loved them. Howard described himself as a “raconteur, a bon vivant, a sportsman…” He was loud, confident and full of life. He preached the “gospel” of Bruce Springsteen music to whoever would listen. And he loved his family and friends unconditionally. Howard leaves behind his wife Sharon and his daughter Laurel, son-in-law Dudley and their children, Caroline, Thomas and Maclean Simmons. He also leaves behind his sister, Becky Byrom, her partner Nancy, his brother John Byrom, numerous nieces and nephews and so many wonderful friends. His heart, his mind and his body are finally reunited with his son, and he is at peace. Donations may be made in his memory to organizations they support in Montana: Haven, havenmt.org, and Warriors and Quiet Waters, warriorsandquietwaters.org. to view the service by online Streaming please use the following link. http://webcast.funeralvue.com/events/viewer/30084

Howard Walter Davis, Jr. left this world just after midnight on May 23, 2020, the result of a pulmonary embolism. He was born in Thomasville, GA on October 19, 1945 to Dorothy Byrom and Howard Davis Sr. Howard moved around the world with his... View Obituary & Service Information

The family of Howard Walter Davis Jr. created this Life Tributes page to make it easy to share your memories.

Send flowers to the Davis family.