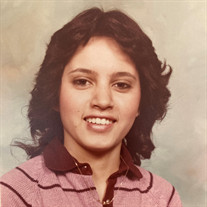 Irma Linda Johnson was born on July 26th, 1964 to Jesse and Adelmira Guzman and passed away on March 8th, 2022. She was one of ten children. She gave birth to two wonderful daughters Heather (Rosebud) and Samantha (LittleTree) Johnson who she loved more than anything. She was employed by Kroger Company for 34 years where she made many lifelong connections. Irma had endless exceptional qualities. She was funny, brave, beautiful, smart and independent. Irma touched many lives with her friendly and selfless nature. She was the type of woman to give you the last dollar in her pocket to help anyone out whether they were a stranger, friend, or family. She loved getting together with family and having a good time. Some of her favorite enjoyments were going camping and being outdoors. She was quick to load up her truck with firewood, hook up her trailer, and head down the open road. Along side her, she always had her two beloved dogs, Kasey and Teddy. She loved caring for animals, especially ones that were strayed and needing love and care. Irma also cherished the simple things in life such as doing yard work, going to estate sales, and listening to music. If she was at a concert, she would be the one to never sit down and you could find her dancing, jamming and living life to the fullest. Irma is survived by her daughters Heather and husband Ryan, Samantha and her partner Legend; Mother Adelmira Guzman; Brothers Richard, Alex, Robert, Adam, Ray, Tommy, Roger, August Guzman; Sister Alicia Guzman-Cline; Nieces & Nephews Justin, Jennifer, Tiffany, Ryan, Jessica, Vanessa, Sylvia, Marcus, Jeremey, Erica, Raechelle, John, Brian, Maleah, Bobbi Jo, Alexandria, Gino, Daniella, Marcus, Anastasia, Autumn, Chloe, Joseph, Eric, Robert, Bailey. She is also survived by many sister in laws, second nieces and nephews along with aunts and uncles. Irma is preceded in death by her father Jesse Guzman, Sherrie Mills, William Johnson, aunts, uncles, along with both maternal and paternal grandparents. Honorary bearers will be her brothers Richard, Alex, Robert, Adam, Ray, Tommy, Roger, August; Son in law Ryan, Legend, and her nephews. A celebration of life service will be held in the near future.

Irma Linda Johnson was born on July 26th, 1964 to Jesse and Adelmira Guzman and passed away on March 8th, 2022. She was one of ten children. She gave birth to two wonderful daughters Heather (Rosebud) and Samantha (LittleTree) Johnson who she... View Obituary & Service Information

The family of Irma Linda Johnson created this Life Tributes page to make it easy to share your memories.