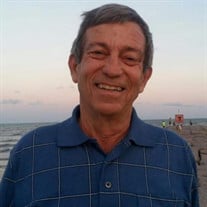 Jack Harper passed quickly receiving his heavenly promotion and reward on February 3rd, 2022. He was a month shy of being 77 yrs old and was born in Mobile, Alabama to Joe and Mavis Harper. They soon moved to Mesquite, Tx where he grew up with his parents and younger brother, Jim. Jack lived a good full life. It was full of happiness, fun and gladness. At an early age he discovered archery, and was very good at it, becoming a State of Texas champion through dedication and practice. When Jack graduated from Mesquite High School, he received awards in Chemistry, Math, Engineering and Science. He went on to UTA for college. There, while working as a Dorm Counselor (counseled other students on their college life experiences), he made the Dean's list with his high grades. Jack often said his brother made the Dean's other list. Later he graduated with degrees in Aerospace Engineering, Civil Engineering and Mechanical Engineering. He carried two, not one slide rule on his belt. He was funny like that! After college he worked for Ross Perot, Bell Helicopter, General Dynamics and Texas Instruments. He was the flight test engineer on the F111 Fighter Jet. That's the Vietnam Era Swept Wing Fighter and other Classified projects. There were also weekly poker games. With Jack's knowledge of math and odds, he cleaned everyone out. We didn't know whether to be suspicious or was he just lucky. When everyone was out of money, he loaned other players money so the game could continue. His accounting of debt was a match book cover with all debts written on the inside. It was always correct and with him. He was kidded relentlessly about his accounting principles. It never bothered him. He was funny like that! Then the best thing in his life happened. He met Connie! They were a lifelong team. They decided to move to the Rio Grande Valley and help build the family scrap metal business, Anglo Iron and Metal Co. before returning to the Dallas area in 2002. His brother said many times that if he could have hand picked a sister for the family, it would have been Connie. Jack's philosophy was "don't judge a man by the many things that he had. Rather, judge him by what he did with those many things when he meets someone in true need." He was funny like that! Jack also loved fishing and camping and was quite the fisherman. He loved his family, his work, and sharing his wealth of knowledge and engineering expertise to help others. Jack was a man of many talents, had a heart of gold, and a great sense of humor. He will be greatly missed by his family and by so many that were blessed to know him. Jack is survived by his wife: Connie, his brother: Jim, his 2 children: Jeric and Camille, 5 grandchildren: Jordin, Lance, Chloe, David, and Korbyn, 1 great grandchild: Payten, and 1 more grandson due in 3 weeks: Jackson. A memorial service to celebrate Jack's life will be at 10:00 AM, Feb. 14th in the Wildwood Chapel at Restland Funeral Home and Cemetary, Dallas, TX. In lieu of flowers a donation can be made to a Kenya village school that Jack and Connie are involved with: Destiny Early Child Development & Day Care Center https://www.destinyecd-kenya.com/ Those who are unable to attend the service in person may access the service via the following Live Streaming link: http://webcast.funeralvue.com/events/viewer/68994/hash:24869AB3C7E70D92

Jack Harper passed quickly receiving his heavenly promotion and reward on February 3rd, 2022. He was a month shy of being 77 yrs old and was born in Mobile, Alabama to Joe and Mavis Harper. They soon moved to Mesquite, Tx where he grew up with... View Obituary & Service Information

The family of Jack Harper created this Life Tributes page to make it easy to share your memories.

Send flowers to the Harper family.