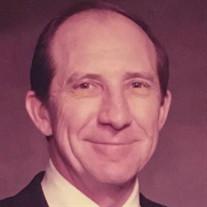 Please join us to celebrate the lives of both James and Eleanor Bahr on Monday May 9th, 2022 at 2PM in the Restland Administration Building on the SW corner of Greenville and Restland. 9220 Restland Rd, Dallas, TX 75243. James Walter Bahr passed away in McKinney, Texas on March 25, 2022. He was exactly 90 years and 8 months old. “Jimmy”, as he was affectionately known as a child, was born on July 25, 1931 to Arthur and Mary Bahr (née Glutch) in Racine, Wisconsin. He was a cute scrappy kid with a crew cut, always running around with his cousins and getting into all sorts of trouble. As a teenager, he ran a mink farm with his buddies. He graduated from Horlick High School in 1950 and then served in the Air Force until 1954. Upon his return, he began working for Western Publishing Company headquartered in Racine. He was responsible for sales and merchandising - organizing and displaying Golden Books and assorted games on drugstore shelves. His first territory was based in Ames, Iowa. While there, he and a buddy were out on the town at a local pizza bowl. As luck would have it, Eleanor Jean Hase was there, too. Over the next couple of years, Jim asked Eleanor to marry him, apparently several times. She finally said yes and they shared their vows on the first day of summer June 21, 1958. They moved to Marshalltown, Iowa where their favorite son Mark James Bahr was born on November 9, 1959. Jim was happy to have a golf partner for the rest of his life, even when Mark started winning. Again with Western, the family of three moved to Birmingham, Alabama in 1964, and then to Dallas, Texas in 1967. Jim’s favorite daughter Kristin Leigh Bahr (Lelsz) was born on July 1, 1968. Here, in Dallas, the family settled into routine life. You could always find Jim on the golf course, even on blistering hot Saturday mornings, with his foursome at Brookhaven Country Club. They were heavily involved in their church, too, at United Church of Christ Central Congregational Church. With a promotion, Jim moved his family back to Racine in 1977. They bought a house just a few blocks away from the office, where he could walk to work every day. Jim loved his career at Western. He was very proud of the Little Golden Books and everything they stood for. Jim was an avid reader, himself, so selling children’s books was like sharing his joy. Jim never met a stranger. He had a smile on his face and was always happy to see you. He loved to listen to you and learn everything going on in your life. He loved to ‘counsel’ his friends and family and to talk things over. “Come here and sit down,” he would say. That was the cue for us to know that we have his undivided attention. And if we found ourselves in what seemed like a dire situation he would calmly say “don’t panic”. He loved people and wanted to celebrate with them. On a few occasions, he and Eleanor hosted ‘garage’ parties for his Western family. The cars would be parked on the road, Eleanor would set out tables and chairs and cook all the food, and Jim would set up the keg and entertain all day. They were also able to attend the annual Toy Fair in New York City where they celebrated career accomplishments, and wined and dined with fellow Westerners and spouses. Jim delighted in seeing the new items on the market and would come home with ‘test’ toys for his children to enjoy. But more importantly, he cherished the time with his friends, who just happened to be coworkers, too. In 1986, Jim and Eleanor moved back to Dallas, Texas and picked up where they left off; still golfing on Saturdays and attending church on Sundays. In 1989, the real fun began when their first grandchild, Mark’s son Collin, was born, who would later take great care of him in his last year. Mark had two other children, Carson in 1992 and Emily in 1997. Kristin had a son Ryan in 2001, and when she announced she was having twins in 2003, Jim said “well good. You’re evening it out. Three for Mark and three for you.” Grandpa loved all six grandchildren and made sure they had the best Christmas Eves ever with cocktails, cokes and chili supper at five o’ clock, followed by church, presents, hot chocolate and cookies. He loved watching the kids shuffle under the tree to find their gifts. Jim knew how to live in the moment. Jim was able to retire from Western in 1993. He and Eleanor took every opportunity to travel, whether it be short driving trips to see the bluebonnets in Texas or long vacations across the country, Alaska, and Europe. Jim and Eleanor were able to celebrate their 60th wedding anniversary in 2018 with their children and grandchildren. Jim is preceded in death by his wife, his parents, and younger sister Ruth Mae Dostalek and husband Robert. He is survived by his favorite Aunt Elizabeth Glutch Cain (97 years old), son Mark and wife Mary, their children Collin Driscoll Bahr, Carson Everett Bahr, and Emily Peyton Bahr, daughter Kristin and husband Dan, their children Ryan James Lelsz, Lauren Danielle Lelsz, and Abigail Leigh Lelsz, brother-in-law Larry William Hase and wife Janis, along with an assortment of nephews, nieces, great-nephews, and great-nieces. He was proud of his family and loved us all. Funeral arrangements for Mr. James Bahr have been faithfully entrusted to Restland Funeral Home and Cemetery, which is located at 13005 Greenville Ave., at the intersection of Restland Road, Dallas, Texas 75243, and can be reached at (972) 238-7111.

Please join us to celebrate the lives of both James and Eleanor Bahr on Monday May 9th, 2022 at 2PM in the Restland Administration Building on the SW corner of Greenville and Restland. 9220 Restland Rd, Dallas, TX 75243. James Walter Bahr... View Obituary & Service Information

The family of James W. Bahr created this Life Tributes page to make it easy to share your memories.

Please join us to celebrate the lives of both James and Eleanor...

Send flowers to the Bahr family.