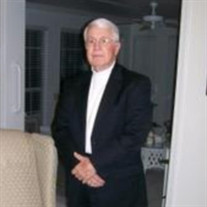 James Caroll Burrus, age 91, passed away on March 31, 2022 in Mesquite, Texas. He was born to Joseph C. and Corda Burns Burrus on February 6,1931 in Patmos, Arkansas. James is preceded in death by his parents and his wife, Louise Hudgens Burrus of 49 years and son John Mark Burrus. James is survived by wife Vivian Spradlin Burrus of 19 years, daughter Jamie Burrus Tidwell and her husband Bill, son Tom Burrus, grandchildren Carrie Bell Batson (Lee), Brian Bell (Leticia), great-granddaughter Bradie Batson, brothers George Burrus and Curtis Burrus (Eileen) as well as numerous nieces and nephews. James was raised in Magnolia, Arkansas and graduated from Magnolia High School. He served in the US Air Force for 4 years before attending the University of Arkansas and East Texas State University. Back in Magnolia on leave from the Air Force, while standing in line at a movie theater, he met a pretty dark-haired girl and asked her for a date. After a whirlwind courtship, he and Louise were married on June 8,1953 at McCord Air Base in Spanaway, Washington. After James’ discharge from the Air Force, they moved back to Magnolia where they welcomed Jamie and Tom before moving to Garland, Texas where they welcomed their third child, Mark. James went to work at Texas Instruments and retired from there after 35 years. After Louise passed away May 2002, James later married a long-time family friend, Vivian Spradlin. James was a charter member of South Garland Baptist Church where he served as a Deacon and a second grade Sunday School teacher as well as working with the cooking team for Wednesday Night Supper. James was also very involved in DAPS (Dallas Area Parkinson Society – South Garland Baptist Chapter). Funeral arrangements for James Caroll Burrus have been faithfully entrusted to Restland Funeral Home and Memorial Parks, which is located at 13005 Greenville Ave., Dallas, Texas 75243 In lieu of flowers, donations maybe made to DAPS or South Garland Baptist Church Restoration Fund.

James Caroll Burrus, age 91, passed away on March 31, 2022 in Mesquite, Texas. He was born to Joseph C. and Corda Burns Burrus on February 6,1931 in Patmos, Arkansas. James is preceded in death by his parents and his wife, Louise Hudgens Burrus... View Obituary & Service Information

The family of James Caroll Burrus created this Life Tributes page to make it easy to share your memories.

Send flowers to the Burrus family.