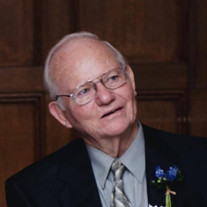 CAPTAIN JAMES L. GREENWOOD, SR. James L. Greenwood, Sr. went to be with his Lord and Savior Jesus Christ on Sunday, November 21, 2021. He was born in Houston on August 15, 1932 and grew up in Shiro, Huntsville, and Navasota. He lived an idealistic life as a child, enjoying his horse, Spot, his cousins, and always a dog. He graduated from Navasota High School in 1950 and then in 1954 from the University of Texas with a degree in pharmacy. In 1966 James graduated from Baylor University College of Dentistry with highest honors. He practiced dentistry in North Dallas until his retirement in 1999. After college James spent two years at Amarillo Air Force Base as the pharmacy officer. When he visited a local church there he met the former Yvonne Boone. They married the following year and had almost 65 wonderful years together. The couple has two amazing children, Brenda Bogart and Dr. James L. Greenwood, Jr., along with their much loved spouses, Bill Bogart and Sheronda (Olson) Greenwood. They have been blessed with four wonderful grandchildren, Stephanie Stephenson Walker (and husband Mike Walker), Bradley Stephenson (and fiancé Kristin Kramer), Clifton Greenwood (and Ashley Moore), and Reed Greenwood (and wife Faith Greenwood). Then came the bonuses: Annie Walker and Piper Greenwood—the great grandchildren. One thing James enjoyed most in life was his dogs. This includes his current furry family, Rusty and Mr. Buffett. James was an avid hobby pilot. He obtained his private and commercial licenses, along with his aircraft mechanic’s license, and most weekends he could be found at the airport out flying or working on his plane. Dr. Greenwood and his family joined Royal Haven Baptist Church in 1966 and have been active members since. During those years, he taught fifth grade boys’ Sunday School, served on many committees, was ordained as a deacon, and was on the Board of Trustees for many years. James was a Master Mason and a member of the Carrollton Masonic Lodge #1400 for more than sixty years. Visitation will be held Thursday, December 2nd at 1:00pm at Restland Funeral Home. Graveside service to follow at 2:00pm at Restland Memorial Park. A Celebration of his Life will be held at Royal Haven Baptist Church (3700 Valley View Ln., Farmers Branch) on Friday, December 3, at 2:00 pm. Instead of flowers, donations would be appreciated in James' name to the ASPCA or the Royal Haven Baptist Church traditional music program.

CAPTAIN JAMES L. GREENWOOD, SR. James L. Greenwood, Sr. went to be with his Lord and Savior Jesus Christ on Sunday, November 21, 2021. He was born in Houston on August 15, 1932 and grew up in Shiro, Huntsville, and Navasota. He lived an idealistic... View Obituary & Service Information

The family of Dr. James L. Greenwood created this Life Tributes page to make it easy to share your memories.

Send flowers to the Greenwood family.