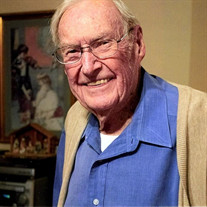 James Allen "Jim" Henderson was born on January 19, 1924, in Wichita Falls, Texas to Joseph and Margaret Henderson. Jim died on January 16, 2022, just 3 days shy of his 98th birthday. He was preceded in death by his wife Clair Henderson, parents Joseph and Margaret Henderson, sister Mary Seguin, sister Dorothy Glasgow, and brother William Henderson. Jim is survived by his wife Doris Henderson, daughter Donna Watts, son Nathan Henderson and wife Linda. Grandchildren Amy Haisler and husband Mark, James Watts and wife Tiffanie, Malcolm Henderson and wife Rachel and, Claire Smith and husband Josh. Great-grandchildren: Ethan, Taylor, Jack, Julia, Camille, and Scarlett. Jim is a WWII veteran who served in the US Navy from 1942 to 1945 as a navigator. He enjoyed traveling and has been to many different places across the world. One of his most memorable trips was one taken to Turkey many years ago. He enjoyed sharing stories of his adventures and travels. Absolutely no one could tell a better story than Jim. His stories were only made better by his laughter. He was well known for laughing throughout the story, so much so, that he would turn bright red. He could make you feel as if you experienced the story yourself. He was an avid reader, which is why he knew something about almost everything. He took great pride in his yard and continued to care for it himself well into his 90s, even though we encouraged him to hire some help. He simply enjoyed doing things for himself. A main driving principle for him was persistence. He just wouldn't quit once he started something. Anything from fixing cars, motorcycles or a broken garage sale microwave that took months just to find a part (a used part and this was pre-internet). He loved to play golf in his younger years and learned to enjoy watching the sport as he grew older. He was an enthusiastic Dallas Cowboys fan and loved cheering for the Longhorns. He was a loving husband, father, and grandfather; a faithful friend and neighbor. James leaves loved ones with a lifetime of memories that will forever be cherished. Jim, Dad/Daddy, Granddaddy/Grandad/Grandpa is greatly loved and will forever be missed. Visitation for James Allen Henderson will be Thursday, February 10, 2022 at 12:00 PM at Restland Funeral Home. A Graveside Service will be Thursday, February 10, 2022 at 1:00 PM at Restland Funeral Home. Funeral arrangements for James Allen Henderson have been faithfully entrusted to Restland Funeral Home and Cemetery, which is located at 13005 Greenville Ave., at the intersection of Restland Road, Dallas, Texas 75243, and can be reached at (972) 238-7111.

James Allen "Jim" Henderson was born on January 19, 1924, in Wichita Falls, Texas to Joseph and Margaret Henderson. Jim died on January 16, 2022, just 3 days shy of his 98th birthday. He was preceded in death by his wife Clair Henderson, parents... View Obituary & Service Information

The family of James "Jim" Henderson created this Life Tributes page to make it easy to share your memories.

Send flowers to the Henderson family.