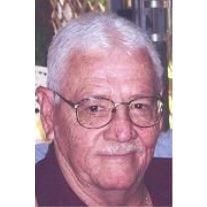 Was born March 15, 1937 to Jane Imogene and James Samuel Maloney, Sr. in Dallas, Texas. He went to be with his Lord and Savior on Christmas day, December 25, 2007. There is no way to describe Sam’s love of life, family, and friends. As a young man Sam was active in youth activities with his church, was an Eagle Scout, and was on the high school track team. He played recreational softball and had a passion for the game of golf, which he continued to play throughout his adult life. He was fluent in Spanish and made a hobby of learning something in every language through the years. He attended Sam Houston State University and was self-employed in the Insurance Business for many years. Sam was a loving father and grandfather; his grandkids loved their ‘Pop’. He will be remembered for his remarkable sense of humor, wit, warmth, intelligence, loyalty and generosity of spirit. Sam was truly admired by those who knew and loved him. He is predeceased by his parents, sister, Susie Tonn and brother Bill Maloney. He is survived by his son, James Samuel Maloney III, daughter-in-law, Wendy, and their children Andrew, Sammy, and Anthony, daughter, Stacy Belt, son-in-law, Patrick, and their children, Jered and Hannah, sister, Pat Brown-Schwartz, and many nieces, nephews, cousins, and friends. Visitation will be from 6 to 8PM Friday December 28, 2007 at Restland Funeral Home. Service will be at 12:30PM Saturday December 29, 2007 at Restland Wildwood Chapel; followed by interment in Restland Memorial Park. Service will be officiated by Rev. JD Matthews. Pallbearers will be Charles Aubrey, Henry Smithey, Tommy Fox, Nicky Fox, Hank Matthews, Jerry Wilson, Don Jester, Mike Sommers. Donations may be made in Sam’s memory to the American Cancer Society, www.cancer.org.

Was born March 15, 1937 to Jane Imogene and James Samuel Maloney, Sr. in Dallas, Texas. He went to be with his Lord and Savior on Christmas day, December 25, 2007. There is no way to describe Sam&#8217;s love of life, family, and friends. As... View Obituary & Service Information

The family of James Samuel Maloney ‘Sam’ Jr. created this Life Tributes page to make it easy to share your memories.