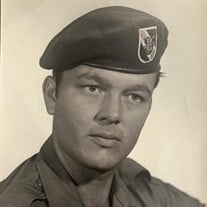 Jay Michael Massey, age 77, passed away on March 8, 2022, in Dallas, Texas. Jay was born on September 12, 1944 in Dallas, Texas to Jay B. Massey and Betty Wilcox Massey. He is survived by his beloved wife, Madeleine; his sons, Patrick and Alan; his granddaughters, Sofia and Mia; his step-granddaughter Lucia Speer; his sister Mary Alice Massey Hall; his daughters-in-law, Claudia and Callie, and his mother-in-law Shirley Jonas. He was preceded in death by his parents; his sister Kathy Massey Stugard; his brothers, Patrick and Joseph; his father-in-law, Nick Jonas; and his nephew, Tahoe Stugard. Jay attended Jesuit College Preparatory School in Dallas, which would shape much of who Jay would become. He graduated in 1962 and shortly after joined the United States Army's 82nd Airborne Division as an Infantryman Paratrooper. He then volunteered for Special Forces training and upon graduation Jay served with the United States Army's First Special Forces Group (Airborne), the Fifth Special Forces Group (Airborne), and the Military Assistance Command, Vietnam - Studies and Observations Group (MACVSOG) . Jay was assigned to the Southeast Asian Theater (Vietnam, Thailand, Okinawa, and Korea) during the Vietnam War for 106 consecutive months, or 8.8 years, from February 1965 through November 1973. Jay had many assignments, including Recon Team Leader (1-0) with MACV-SOG, and tours with B-50, and The Special Mission Advisory Group (SMAG). Jay was awarded multiple combat and service awards. He retired from the U.S. Army in August of 1982 as a Master Sergeant in the Active Duty US Army; and a Captain in the United States Army Reserve. Jay graduated with a BA in Business Administration with Magna Cum Laude honors from Sam Houston State University in 1979. He then went on to earn a Master's Degree in Land and Real Estate Economics from Texas A&M University in 1982. Jay was very proud to have his two sons watch him graduate. Jay re-entered civilian life as a commercial real estate appraiser in 1982. After multiple promotions and moves in his successful career, he founded the Jay Massey Company in 1989, a highly successful multi-service commercial real estate company. Over the years, Jay taught and mentored many young professionals who are now leaders in their fields. He was very proud and grateful to God for that opportunity. Jay was proud of his Chickasaw heritage and he instilled in his family the love of the American Indian culture and traditions. Jay was a devoted and loving husband, father, grandfather, brother, uncle and friend to many. Jay always led by example. He helped shape the character of many who worked with and for him. He always had an encouraging word, and his positivity had no limit. He is remembered by all as a man of selfless generosity and unflinching integrity and loyalty. Jay was a proud American. A Celebration of Life Service will be held on Saturday, March 26th, 2022, at 2:00 p.m. at Restland Funeral Home (13005 Greenville Ave, Dallas, TX 75243). The interment of ashes ceremony will take place Monday, March 28th, at 10:00 a.m. at the DFW National Cemetery (2000 Mountain Creek Parkway, Dallas, TX 75211). . Services will be livestreamed please follow the link below. http://webcast.funeralvue.com/events/viewer/71152/hash:91C151D646F71E14 Funeral arrangements for Jay Michael Massey have been faithfully entrusted to Restland Funeral Home and Cemetery, which is located at 13005 Greenville Ave., at the intersection of Restland Road, Dallas, Texas 75243, and can be reached at (972) 238-7111.

Jay Michael Massey, age 77, passed away on March 8, 2022, in Dallas, Texas. Jay was born on September 12, 1944 in Dallas, Texas to Jay B. Massey and Betty Wilcox Massey. He is survived by his beloved wife, Madeleine; his sons, Patrick and Alan;... View Obituary & Service Information

The family of Jay Michael Massey created this Life Tributes page to make it easy to share your memories.

Send flowers to the Massey family.