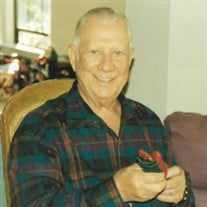 Jerrold "Jerry" Harrison, age 99, of 1812 Krokus Dr. Keller, Texas left this troubled world to be with God on June 8, 2020. He lived a long and happy life and passed away peacefully while sleeping at The Harrison Nursing Home in Keller, Texas. Jerry was born in Duncan, Oklahoma to George Wallace "GW" Harriosn and Lura Faye Currey but spent most of his young life in Daingerfield, Texas helping his father operate a grocery store. Jerry attended Daingerfield High School and shortly after graduating joined the US Army in 1942 where he received training as a medical clerk. He served as a corporal in the 56th Medical Corps in Safi, French Morocco, North Africa, in a military hospital. He was later retrained in infantry tactics and in 1944 he transferred to the 350th Infantry Regiment, 88th Inf. Division. He fought in Europe in two major battles: The Battle of Po River Valley (Italy) and The Battle of N. Apennines Mountains (Italy). Following the Allied Victories in Europe and the Pacific, he was honorably discharged in October 1945. Jerry was married to his wife, Martha in 1964 and lived in Irving, Texas and Rowlett, Texas until her death in 1997. He then moved from Rowlett to Miller Grove, Texas and then, to Keller, Texas. Jerry had a successful career working as a real estate broker and was a member of the Irving, Texas Board of Realtors and an active member of the Irving Chamber of Commerce. Jerry was pre-deceased by his wife, Martha; his brother, Major Wallace C. Harrison (died in WWII) and sister, Lura Mae Hadlock. Jerry is survived by his daughter and son-in-law, Geraldean (Geri) and Thomas Shehan of Keller; sons and daughters-in-law: Wallace and Jen Fe Harrison of Irving and Barney and Lucretia Van Huss of Houston; grandsons David and Daniel Hardy and Michael Harrison; granddaughter, LouAnn Harrison; great grandsons: Chael and Matteo Harrison and Matthew Hardy and his great granddaughters: Chandler and Ava Harrison. Services will be in Daingerfield, Texas and are pending In lieu of flowers, donations can be made to the Daingerfield Cemetery Association, c/o Roy Nail, 400 Webb St. Daingerfield, TX 75638.

Jerrold "Jerry" Harrison, age 99, of 1812 Krokus Dr. Keller, Texas left this troubled world to be with God on June 8, 2020. He lived a long and happy life and passed away peacefully while sleeping at The Harrison Nursing Home in Keller, Texas.... View Obituary & Service Information

The family of Jerrold "Jerry" Harrison created this Life Tributes page to make it easy to share your memories.

Send flowers to the Harrison family.