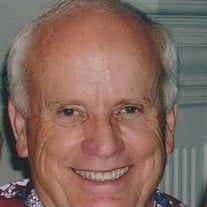 Jerry Clark Cramer passed away on Thursday, October 21, 2021 at the age of 83, after a long and courageous battle with dementia. He was born July 18, 1938 in Wichita Falls, TX to Jean Elizabeth Hodge and Samuel Joseph Cramer. Jerry lived in Electra, TX before moving to Dallas during his elementary school years. Jerry was raised by his grandmother and grandfather, Faye Odessa Cahill and Dr. Samuel Elihu Cramer. He graduated from North Dallas High School in 1956. After high school he wanted to see the world before going to college, so he joined the US Navy. He spent several years in the Navy aboard the USS Muliphen, based out of Norfolk, VA. His stint in the Navy sent him through the Mediterranean Sea and was a part of the US military blockade around Cuba during the Cuban missile crisis. During his time in the Navy, he earned a two-year electronic technician degree. The Navy was an experience he truly loved. He had such a love for this country and respect for the armed forces. After the Navy, Jerry began working for Dallas Power and Light. Passionate about helping kids, he enrolled at North Texas State University (now UNT) to become a teacher. He worked his way through college and earned a B.S. in Education in 1968 and a M.S. in Education in 1972. After college, Jerry was an educator in Dallas from 1968-2002. He taught at Thomas Jefferson High School in Dallas ISD, Sellers Middle School, and J.W. O’Banion Middle School, both in Garland ISD. During his summer breaks as a teacher, he began flipping houses and later began keeping the houses he remodeled as rental properties. He was also briefly a partial owner in a metal fabrication shop in Dallas. Jerry loved playing sports in his childhood and continued to play softball well into his 70’s. As a young man he enjoyed spending time water skiing and camping. Jerry Cramer is survived by his loving wife Nancy Adams Cramer of 49 years, daughter Susan Whitehurst, sons Travis Whitehurst, Michael Whitehurst, and Steven Cramer (wife Lisa); grandchildren Andrea Canalito, Christopher Whitehurst, Adam Smedsted, Will Springer, Jessica Springer, and Cody Cramer; and sister Jan Vaughn. He was preceded in death by his daughter in law Jane Saladino, his parents, and his grandparents. He was a dedicated husband, father, grandfather, brother, uncle, and friend whose love for Jesus Christ was evident in everything he did. He always put his family before himself and would go out of his way to help others. He always did the right thing, had a big heart, and had a soft spot for kids and dogs. He was always happy and loved to joke around and give you a hard time. Funeral services will be at Restland Funeral Home & Memorial Park - Wildwood Chapel, 13005 Greenville Ave, Dallas, TX on October 27, 2021 at 1PM and is open to everyone. A reception will be held immediately following the services at the home of Kellam & Emily Colquitt at 12321 Brittany Circle in Dallas, TX.

Jerry Clark Cramer passed away on Thursday, October 21, 2021 at the age of 83, after a long and courageous battle with dementia. He was born July 18, 1938 in Wichita Falls, TX to Jean Elizabeth Hodge and Samuel Joseph Cramer. Jerry lived in... View Obituary & Service Information

The family of Jerry Clark Cramer created this Life Tributes page to make it easy to share your memories.

Send flowers to the Cramer family.