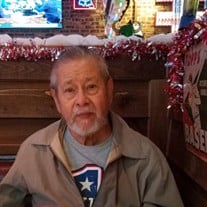 Jesus (Jesse) Salinas , Sr was born December 30, 1938 in Brownsville, Texas and passed away August 26, 2020 in Dallas, Texas. Preceded in death by Aurora Olga his wife, Maria Salina his mother, Manuel Salinas his father, Elida his sister, Virginia his sister, Manuel his brother, Miguel his brother and George and Dora Cortinas his in-laws. He is survived by Jesus Salinas Jr his son, Alma Salinas, daughter, Dora Salinas ,daughter, Jocelyn and Vanessa Najarro his granddaughters, Fernando Salinas his brother, and Rosie Juarez his sister. Jesse was a Christian, kind, generous, funny, and loving husband, father, and “Pau Pau”. He served his country in the U.S AirForce and National Guard reserves. Jesse was very active with his granddaughters. Known as Pau Pau he helped raised them to have a “Salinas” sense of humor and was always there for them with love and support.

The family of Jesus "Jesse" Salinas created this Life Tributes page to make it easy to share your memories.

Send flowers to the Salinas family.