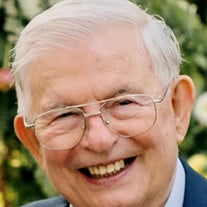 Some knew him as Jay, Jordan, Jaybird, Papaw (even ‘chocolate milk Papaw’), Papa Jay, Gramps, Mr. C, even pretty boy, but his kids just knew him as Dad with a big heart! He would take in strangers in need and there was always room at the table for friends of his children, no doubt learned from his mother’s example during the depression. His laughter was infectious. He knew no stranger and his smile could light up the room. He loved music, yet couldn’t carry a tune and no one seemed to care because he always sang with pure joy in his heart. He loved the Lord, taught Sunday School and raised his children to serve others. Jordan Alton Curington’s life revolved around family. No one saw it coming as he was always full of life and certainly not so soon after losing his dear wife of 67 years a mere six months prior. On November 21, 2021, at the age of 87, he passed away in Garland, Texas. Jordan served in the Army during the Korean Conflict missing the birth of his firstborn son, David. Thereafter, he worked as a railroad brakeman, but when it took him away from his young family he moved to Fort Worth where he worked as a blueprint inspector for General Dynamics. After several positions in the service industry, he spent the last 17 years of his working career on staff at KVIL always serving others. Jordan was known for his ‘words of wisdom’ as he was always waxing eloquently about something. He loved spectator sports, especially Texas Tech Women’s Basketball, the Dallas Cowboys, and the Texas Rangers. After he retired, he wrote poetry about his life experiences. He never claimed to be perfect, but he strived to be like Jesus and that made him perfect to his family. We were all blessed to know him. Jordan was born on September 15, 1934 to Aubrey Clinton and Mildred Alene Curington in Lubbock, Texas. In 1954, he married his high school sweetheart, Nancy Jane Curington, and raised five children, David Alton Curington, Denise Diane Hayes, Donna Lynn Mattson, Darrin Wayne Curington, and Debra Suzanne Clarke. Together they celebrated their 11 grandchildren and 32 great-grandchildren. He will be greatly missed by all who knew him! To view Live-stream please click on link; http://webcast.funeralvue.com/events/northstar/64256/hash:534D4781F17C47DF

Some knew him as Jay, Jordan, Jaybird, Papaw (even &#8216;chocolate milk Papaw&#8217;), Papa Jay, Gramps, Mr. C, even pretty boy, but his kids just knew him as Dad with a big heart! He would take in strangers in need and there was always room... View Obituary & Service Information

The family of Jordan Alton Curington created this Life Tributes page to make it easy to share your memories.

Some knew him as Jay, Jordan, Jaybird, Papaw (even ‘chocolate...

Send flowers to the Curington family.