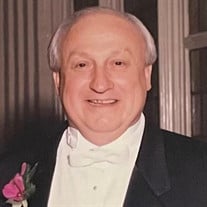 Joseph Carrabba, Jr. 81, passed away peacefully in his home on April 10, 2022. Joe was born December 8, 1940, in Dallas, TX to Minnalee and Joseph Carrabba Sr. Joe grew up in Dallas and graduated from Woodrow Wilson High School class of 1958. He then joined the Army and served as a Paratrooper in the 82nd Airborne Division based out of Ft. Bragg, NC. He returned to Dallas where he met Harriet Lynn Edwards and they married on October 23, 1963. They were married 40 years before she preceded him in death. Upon his return from the Army, Joe began working for the US Postal Service. At the same time, he was following in his father’s footsteps and worked as a Butcher for Minyard’s Food Stores. Through his hard work and knowledge of the meat industry he was noticed by the executives at Cullum Companies known as Tom Thumb Supermarkets. He was initially hired as a Sales Representative for Gooch Meat Company, a division of Cullum Companies. He spent the next 25 years advancing in different buying roles within the organization and finally retired as the Vice President/Director of Procurement in 1992. He truly loved his job and the people at the Tom Thumb Supermarkets and was very proud to work there. Joe received the Master of Frozen Food Merchandiser award in 1983 for his “dedication, creativity and professionalism” for advancement in the industry. The second chapter of Joe's career was as owner of two Eagle Postal Centers where he enjoyed employing and mentoring his nephews. Joe was a great lover of animals, especially his two schnauzers, Hobo and Winsky. He was also a lover of horse racing and never missed a trip to try his hand at Blackjack. He is survived by his daughter, Kelly Rae Carrabba Castillo, husband Marco and his grandchildren Georgia Lynn and Gian Marco Castillo whom he loved dearly. Joe is survived by his sister, Mary Helen Hale, nieces Angela Hale and Stacey Wittrup. He is also survived by his sister-in-law Kathrine Dow and nieces Patricia Dow Garza, Dr. Jamie Dow Tomlin, Melanie Florsheim, and nephews William R. Edwards, III, Andrew Edwards, and Jon Paul Edwards. Joe is survived by his longtime friend and companion Martha Stafford. A memorial service will be held in the Abby Chapel at Restland Cemetery on May 3rd at 1 pm. A reception will follow at the Restland Reception Hall. which is located at 13005 Greenville Ave., at the intersection of Restland Road, Dallas, Texas 75243, and can be reached at (972) 238-7111.

Joseph Carrabba, Jr. 81, passed away peacefully in his home on April 10, 2022. Joe was born December 8, 1940, in Dallas, TX to Minnalee and Joseph Carrabba Sr. Joe grew up in Dallas and graduated from Woodrow Wilson High School class of 1958.... View Obituary & Service Information

The family of Joseph Carrabba Jr. created this Life Tributes page to make it easy to share your memories.

Joseph Carrabba, Jr. 81, passed away peacefully in his home on...

Send flowers to the Carrabba family.