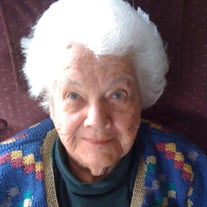 Josephine B. Roberts, age 105, passed away on January 13, 2022, in Bonham, Texas. She was born to George Herbert and Mary Martha Brinkerhoff on July 14, 1916, in Tyler, Texas. Josephine leaves her loved ones with unforgettable memories and loving stories. She will be sincerely missed by her loving family, devoted friends, and all the wonderful individuals who knew and loved her. For 43 years Jo Roberts was a teacher in Texas, beginning in Breckenridege, Texas, then in Tyler, in Beaumont and finally in Richardson. In Beaumont, Jo switched entirely to a Latin curriculae, establishing third year and fourth-year Latin classes, as she did later in Richardson, Under Jo's direction, Beaumont HS and then Richardson HS became both State and National Champions in the Junior Classical League. Her primary focus was on word study, using Amsel Greene's Word Clues, and under her tutelage many of her students achieved advance placement in their college courses. During her 100th Birthday Party in Bonham in 2016, over 56 former students and their spouses, flying in from all over the US, and they joined the congregation of First Presbyterian Church Bonham to celebrate Jo Roberts. Many recounted their favorite "Jo" stories and toasted her with tributes. Randy Farber (1977) said that his favorite Latin conundrum was "Semper Ubi; Sub Ubi." (Translated: Always where under where). White David Esmail (1978) quoted one of his favorite faux Latin poem: "O Sybilli, si ergo/Fortibus es in ero./O Nobili, demis trux./Savatis enim causen dux." (Translated: Oh see Billy, See them go/40 houses in a row? Oh, No Billy, them is trucks, see what's in them: cows and ducks) Charles Nutt simply wrote: "....our Beloved Mrs. Roberts...was quite a lady, who impacted everyone she taught." Chris Stratton wrote: "Every once in a while, someone comes along who is the right person for the job. Mrs. Roberts was not only born to teach but born to teach Latin." Mrs. Roberts was an excellent teacher, wife and mother. She was deacon and Bible Scholar. But Jo had a sly, wicked sense of humor, and her favorite mock Latin aphorism was: "Illegitimi non carbonrundum est." (Loosely translated: Don't let the bastards grind you down.) Josephine B. Roberts was preceded in death by her husband of 56 years, James Drane Roberts; parents, George H and Mary Brinkerhoff; brother William Jacob (Jake) Brinkerhoff; sister Dorothy Henrietta Brinkerhoff Ford; uncles, Joe Bieser and William E. McCorkle; Aunt Bea Bieser; and a nephew Robert G Ford. She will be lovingly remembered by son James David Roberts; daughter Archana Mary Jo Roberts; Grandcat Corazon (Cory); grandniece Stacey Ford McGlaun; grandnephew S. Glenn Ford; and great great nieces CeCe Jordan, Marcelle Jordan, Lauren Mullins, Kayla Ford A service at the graveside will take place on Friday, February 18, 2022, at 2pm at Restland Memorial Park - 13005 Greenville Ave., Dallas, Texas 75243. The family respectively asks that for all of those planning on attending the graveside service wear a mask. In lieu of flowers, please consider making a donation to one of the following organizations': World Wildlife Fund www.worldwildlife.org Humane Society www.humanesociety.org Home Hospice of Grayson, Fannin and Cooke Counties www.homehospice.org

Josephine B. Roberts, age 105, passed away on January 13, 2022, in Bonham, Texas. She was born to George Herbert and Mary Martha Brinkerhoff on July 14, 1916, in Tyler, Texas. Josephine leaves her loved ones with unforgettable memories and loving... View Obituary & Service Information

The family of Josephine B. Roberts created this Life Tributes page to make it easy to share your memories.

Send flowers to the Roberts family.