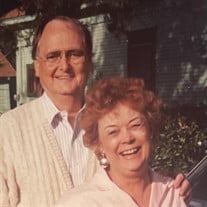 Joyce Louise (Halbrooks) Carroll passed away peacefully under the care of Faith Presbyterian Hospice on April 6, 2022, at the age of 91. Joyce was born on January 30, 1931, in Dawson, Texas to Henry Clay and Addie Belle Halbrooks. She graduated from Woodrow Wilson High School in Dallas in 1948 and attended Southern Methodist University. She met Van Carroll Jr on a blind date and they were married on May 23rd, 1953 moving as newlyweds to Corpus Christi, Tx. In 1961, they moved to Dallas and a year later they moved to Highland Park where they raised two lovely daughters. Joyce worked for years as the executive secretary to the founder of HKS architectural firm, and later worked alongside her mother planning travel trips around the world for members and friends of Highland Park United Methodist Church where she was a member for over 60 years. Joyce loved to travel, read, and knit. For years, she shared Book Club with several of her friends from Highland Park, and later in life she became an avid bingo player (which if you asked, she would tell you she always won). She was also a member of the Philanthropic Educational Organization (PEO) sisterhood where women celebrate the advancement of women through education, support, and mutual encouragement. She was preceded in death by her parents, her husband, and her son-in-law Jordan Minyard. She is survived by her daughters Amy Carroll Minyard and Melissa Carroll Farish (Dave), four grandchildren: Justin Minyard (Kaylyn), Ryan Minyard, Meredith Bogin (Rick), and Caroline Farish, and three great-grandchildren: Mackenzie, Kinleigh, and Evie. A memorial service will be held on Friday June 10th at 10:00 am in Cox Chapel at Highland Park United Methodist Church. Funeral arrangements for Joyce Louise Carroll have been faithfully entrusted to Restland Funeral Home and Cemetery, which is located at 13005 Greenville Ave., at the intersection of Restland Road, Dallas, Texas 75243, and can be reached at (972) 238-7111.

Joyce Louise (Halbrooks) Carroll passed away peacefully under the care of Faith Presbyterian Hospice on April 6, 2022, at the age of 91. Joyce was born on January 30, 1931, in Dawson, Texas to Henry Clay and Addie Belle Halbrooks. She graduated... View Obituary & Service Information

The family of Joyce Louise Carroll created this Life Tributes page to make it easy to share your memories.