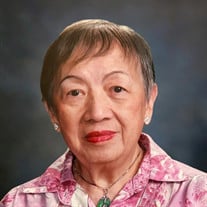 Mrs. Kam Tong (“Theresa”) Lam Lai [ 林黎锦棠 ] was born in Hong Kong on March 9, 1925. She was the 5th of 11 children. She attended St. Paul’s Convent School in Hong Kong and worked as a clerk in Tianchu MSG Manufacturing. In 1941, at the beginning of WWII. Theresa resigned and started private home tutoring, teaching English and other subjects. In 1948, she married Kwong Chung Lam, and they had three children: Ying Kit, Suet Man, and Ying Yee. Theresa devoted her life to raising her children with strong character. As a mother, she cared for, protected, advised and nurtured them. She was also compassionate and generous to her friends and relatives as she would go out of her way to help others that she loved. Theresa lived through the Japanese occupation of Hong Kong, which was a testament to her will to survive. In the 1970s, she and her husband further demonstrated their strong will to thrive as they immigrated to the U.S. and resettled in Flushing, NY. For the next 40 years, they made a life for themselves in New York with their youngest and faithful son, Ying Yee. Theresa was also a formidable woman, who held tight to her beliefs. In 1976, she accepted Jesus Christ as her savior. Years later, after her husband also became a believer, they were baptized together. In the latter years of their lives, Theresa and her husband traveled the world and stayed in many places, including Australia to be with their beloved daughter, Suet Man. After the sad passing of her husband and youngest son, Theresa relocated to Dallas where she was well cared-for by her oldest son, Ying Kit and his wife, Donna. Theresa passed away peacefully on February 26, 2022. We celebrate her life and though we will miss her terribly, we are glad that she has joined her husband and youngest son in heaven. We shall meet again!

The family of Kam Tong Lam created this Life Tributes page to make it easy to share your memories.

Send flowers to the Lam family.