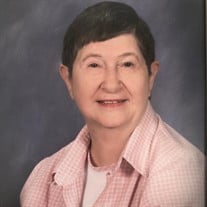 Karen Redmond, 80, passed quietly early in the morning of April 23, 2020, after her heart ceased at Houston Methodist Hospital-Clear Lake. She had been living with numerous age related issues, including the after effects of a stroke in July 2016. Karen was born May 30, 1939, in Meriden, Connecticut. She was the only child of Ralph and Marion (Petrosky) Rose of Wallingford, Conn. Karen was a student of Lyman Hall High School, and after graduation, went on to earn a degree in nursing from Boston University and a master’s degree at University of Texas, Dallas. After marrying her high school love interest, Charles (Bob) Robert Dean, Karen had three beautiful daughters, Laurie Ann, Lynda Rose, and Sheri Lyn. Some years after her divorce from Bob, Karen married her second husband, Francis (Frank) Redmond in 1971. Karen’s career as a nurse was a long and devoted one in Labor and Delivery. She served as a nurse and head nurse at the Hurst-Euless-Bedford Hospital for many years. At the same time, Karen taught Lamaze and Natural Childbirth classes to pending parents. During the 1970’s and 80’s, Karen took two trips to communist countries, China and the USSR, as a nursing ambassador, to exchange views on childbirth nursing care. These trips were of great significance to her. In 1980, she moved with her family to Palestine, Texas, where she embarked on a second career as a Labor and Delivery nurse at the now Palestine Regional Hospital. Again, Karen taught Lamaze in the town. Karen participated in the deliveries of hundreds of over her long career. Also in1980, the losses of her first daughter Laurie, at age 18, and her Mother a couple months apart had a major impact on her, and she became a regular member of the support group, Compassionate Friends in Palestine, Texas. She remained active in Compassionate Friends for years. During her life, Karen enjoyed the company of friends and sang in the choir at the First United Methodist Church in Palestine. She enjoyed playing bridge with her friends at the Harvey Women’s Club (Palestine) and traveling the country with her husband and family. Although she disliked cooking, she was a great cook. Karen had a joyous and positive personality that attracted many people. She was persistent, reliable, caring, and balanced in her life approach and in raising her two surviving daughters. She did not let much get her down, and remained a steadfast trooper to the day she passed. Karen’s death is preceded by her husband, Frank, in 2008 and her daughter, Laurie in 1980. She is survived by her daughters, Lynda Rose Estes (husband Jay) of Friendswood, Tx, Sheri Lyn Taylor (husband Jody) of Flint, Tx, and her two grandsons, Justin Dean Estes (22) and Joel Ryan Estes (18), both of Friendswood, Tx. A small, family graveside service will be held at Restland in Dallas on April 29, 2020. Once gatherings are allowed, there will be a memorial service at Karen’s home church, First United Methodist Church in Palestine, Tx. In the current times of limited travel and gatherings, the family requests donations to organizations of importance to Karen in lieu of flowers. Recommendations are listed. The family requests donations to the following charities in lieu of flowers: First United Methodist Church, Palestine 422 S. Magnolia Street Palestine, Tx 75801 Online: www.fumcpalestine.org Indicate in memory of Karen Redmond Houston Methodist Clear Lake Hospital Nursing Excellence Fund: Mail checks to Houston Methodist Hospital Foundation, P.O. Box 4384, Houston, TX 77210-4384; or give online at https://givingforms.houstonmethodist.org/GeneralGivingForm Indicate in memory of Karen Redmond Tyler Day Nursery 2901 W. Gentry Parkway Tyler, Tx 75702 Indicate in memory of Karen Redmond

Karen Redmond, 80, passed quietly early in the morning of April 23, 2020, after her heart ceased at Houston Methodist Hospital-Clear Lake. She had been living with numerous age related issues, including the after effects of a stroke in July... View Obituary & Service Information

The family of Karen Redmond created this Life Tributes page to make it easy to share your memories.

Karen Redmond, 80, passed quietly early in the morning of April...

Send flowers to the Redmond family.