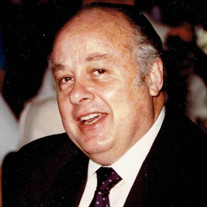 Lloyd was born on May 17, 1927, a few minutes after his brother Floyd. He weighed 3 ¼ lbs. and Floyd 2 ½ lbs. with a blanket wrapped around them. The traveling doctor (Dr Killam) said they would both die &#8211; and looking back he was right,... View Obituary & Service Information

The family of Lloyd K Humphries created this Life Tributes page to make it easy to share your memories.

Send flowers to the Humphries family.