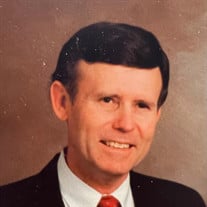 Lloyd Douglas Scoggins, affectionally known as Doug, passed away on February 25th at the age of 84, in Austin Texas. He is survived by his wife, Susan; his children Zachary, Christine and Todd; and his grandchildren Scarlett, Parker, and Billy. Doug is reunited in heaven with his first born child who died in childhood, Angela; his parents, Marion and Frankie Scoggins; and his sister Carol Porter. His battle with cancer over the last decade proved his genuine love for life and revealed his true grit and determination. Doug was born in Stafford, Arizona on January 27, 1938 but raised in Sherman, Texas. He served in the US Navy from 1958 to 1962 as an Aviation Electronics Technician and aircrew member with Patrol Squadron Five (VP-5). In 1966, he graduated with a Bachelors in Electrical Engineering from University of Texas at Arlington and moved to Houston to start his first job at NASA where he worked as an aerospace engineer. He moved to Dallas where he met and married Susan in 1973 and began his 35 year long career working for the Office of Naval Research. He retired in Austin in 1996 after working a short time at the Research Grant Department at the University of Texas. Doug often shared fond memories of summers spent as a teenager working at his uncles lumber company in Oregon, his journeys travelling around the world in the Navy, sailing on his boat at the lake before starting a family, and skiing in Colorado with his wife. His family teased him for spending too much time watching Fox News and taking all year to work on his taxes to find loop holes for his wife’s Austin real-estate ventures. His favorite things while retired, were camping and hiking with his family and close friends. He also loved being on his computer researching anything and everything; from healthy diets to the best electronics on the market. Most of all he loved spending time with his family, at home and having the grandkids come visit. Doug will be buried in Dallas, Texas. A small graveside service with his family and friends will be held on Tuesday, March 15, 2022 at 10:00am. The family will be meeting after the service at Red Lobster around 12:30pm for a memorial lunch. Red Lobster: 9069 Vantage Point Dr., Dallas, TX 75243 Google Map Link: https://goo.gl/maps/wgiDmiKAe3xf3VvD9

Lloyd Douglas Scoggins, affectionally known as Doug, passed away on February 25th at the age of 84, in Austin Texas. He is survived by his wife, Susan; his children Zachary, Christine and Todd; and his grandchildren Scarlett, Parker, and Billy.... View Obituary & Service Information

The family of Lloyd Douglas Scoggins created this Life Tributes page to make it easy to share your memories.

Send flowers to the Scoggins family.