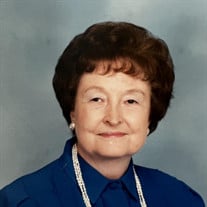 Lora Nell Corbet, age 92, passed away peacefully on Wednesday, April 13th in Dallas, Texas. Nell was born on November 23, 1929 in Dallas, Texas to Robert Elmer Maloney and Mary Etta Anderson Maloney. Her love and devotion to her family began early on as she was the youngest of 12 children. Nell graduated from North Dallas High School in 1947 and began working at the Martha Washington Candy Store in downtown Dallas. At the time, she was living on Cole Avenue next door to Mr. and Mrs. John B. Corbet. Their son, Alton Rae Corbet was discharged from the Navy in 1946 and returned home. Alton and Nell met on a McKinney Avenue Trolley car one evening as they both came home from work. Alton always said that was the “luckiest day of his life” and he was blessed to have the opportunity to marry the “girl next door”. Nell and Alton were married on June 12, 1948. Nell and Alton settled in the Lake Highlands area and attended North Minister Presbyterian Church with their two children. They lived there 57 years developing life long friendships with their neighbors. They were married 69 years until Alton’s passing in 2017. Before settling in Dallas, Nell worked for the Social Security Administration Office in San Diego while Alton was serving in the Navy. She later transferred to the Social Security Administration Office in Dallas when they returned home. She also worked for the Dallas Independent School District. She spent time as a stay at home Mom for several years. And in 1976 she went back to work for TXU - Texas Utility Company. She earned her Associates Degree in 1985 and retired from TXU in 1992. Nell was the sweetest person in the world and she loved spending time with her family. She smiled the most when she hosted all our family events either in their home in Dallas or at their farm in East Texas. She created all of our family traditions out of the love for her family. During retirement she enjoyed traveling, and some of her favorite trips were to Arkansas, Alabama and Tennessee researching her family genealogy. She also thoroughly enjoyed attending her grand daughters activities. Nell was a sweet, genuine, caring and loving wife, mother, mother in law, grandmother, sister and aunt.She was loved and will be missed by everyone who knew her and loved her. She was preceded in death by her husband, Alton Corbet, her parents and her siblings. Nell is survived by her two children, Linda Hay (Richard) and Kevin Corbet (Deborah); her granddaughters, Jennifer Hay, Laura Corbet and Ashley Corbet and many nieces and nephews. Nell’s funeral service will be held at Restland Funeral Home, Monday, April 18, 2022. The viewing will be held at 1:30pm and the service will begin at 2:00pm at the Wildwood Chapel, 13005 Greenville Avenue, Dallas, Texas 75243.

The family of Lora Nell Corbet created this Life Tributes page to make it easy to share your memories.

Send flowers to the Corbet family.