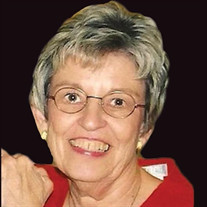 On Wednesday, February 2, 2022, Lucy Bateman, loving wife, mother, grandmother and great grandmother passed away at the age of 88. Lucy was born on December 19, 1933 in Oklahoma City, OK to Glenn and Mabel Griffin. After graduating from Central High School, she went on to Oklahoma State University where she received a degree in Elementary Education in 1955. She was a very proud member of the Chi Omega sorority. After graduation Lucy moved back home to Oklahoma City where she began her career as a Kindergarten teacher at Kaiser Elementary School. She met the love of her life, Marshall Bateman, on a blind date right after graduating college. They enjoyed going to the movies, having picnics, and watching TV at her parent’s house. They were married on January 28, 1956 and lived in Oklahoma City. They raised one daughter, Susan and three sons, Mark, Mike, and Tom. After Susan and Mark were born, Lucy and Marshall moved the family to Dallas after Marshall accepted a job. They raised their young family in Dallas where Mike and Tom were born. While Lucy was busy taking care of the kids, she also found time to teach Sunday School and volunteer at countless organizations. She and Marshall were long time members of Wilshire Baptist Church where they both taught children’s Sunday School. Lucy also enjoyed playing the piano at area nursing homes on Sunday mornings. Lucy loved taking care of people; her kids, students, friends and family. She volunteered at Presbyterian Hospital weekly for over 20 years and delivered Meals on Wheels. She also volunteered as an election official, worked with Cornerstone Baptist Church and was President of the PTA in every school her kids attended. Lucy was a longtime substitute for the Richardson Independent School District where on many occasions her grandchildren were in her classes. One of her true loves was family camping at Camp Grady Spruce on Possum Kingdom Lake. For over 30 years the family spent several weekends a year enjoying camping, boating, fishing and Lucy’s cold fried chicken. All her grandkids experienced the lake with her and have great memories of card games, campfires and floating in Hell’s Gate. Lucy also loved sports. She loved attending her kids’ sporting events and never missed a game. She was always watching a game on TV, no matter the sport. Her favorite sport was baseball as she and her daddy would listen to the St. Louis Cardinals games on the radio when she was growing up. She passed that love of sports to her boys, where they often connected while watching her teams play. And of course, later in life Lucy experienced the great joy of being “Nana” to her many grandchildren and great grandchildren. She lived for the opportunity to be a part of their lives and to share her limitless love for each one of them in a special way that only a Nana could. Lucy was preceded in death by her husband Marshall, her father, Glenn, her mother, Mabel and her brother Robert and sister Betty. She was also preceded in death by her son, Steve. Lucy is survived by her four children and their spouses, Susan and David Solomon, Mark and Kathy Bateman, Mike and Mindy Bateman and Tom and Julie Bateman, all of Dallas, TX. Lucy had 11 grandchildren and 12 great grandchildren and many nieces and nephews. A funeral service will be held on Saturday, February 26th, 2022 at Wilshire Baptist Church at 4316 Abrams Rd., Dallas, TX 75214 at 3pm. Flowers may be sent to Wilshire Baptist Church. In lieu of flowers, memorial donations may be made to Wilshire Baptist Church Children’s Ministries

On Wednesday, February 2, 2022, Lucy Bateman, loving wife, mother, grandmother and great grandmother passed away at the age of 88. Lucy was born on December 19, 1933 in Oklahoma City, OK to Glenn and Mabel Griffin. After graduating from Central... View Obituary & Service Information

The family of Lucy Ann Bateman created this Life Tributes page to make it easy to share your memories.

Send flowers to the Bateman family.