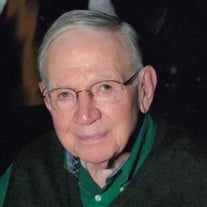 Hearon, Marion Heard. A much loved father, and grandfather (Papa-daddy) moved to Heaven on May 27, 2020, just in time for breakfast. He was born in the tiny community of Cotton Gin, Texas to Stella Fitzpatrick Hearon and Uriah Joseph Hearon on August 9, 1926. After graduating from Teague High School, he worked assembling war planes until he turned 17 and then joined the US Navy to fight in World War II - with his mother's required permission. As part of the Greatest Generation, he toured the Pacific on the USS Wake Island and fought in battles at Luzon, Guadalcanal, Iwo Jima and Okinawa. His main job was to help maintain airplanes, from which his hearing never fully recovered. For a little extra money, he volunteered to ride in the hopefully-repaired airplanes and to make sure they were combat-ready. After returning from the war, he graduated from Southern Methodist University in 1949, thanks to the GI Bill and an unknown financial donor. He met HelenLee in college and they married in 1951. Together, they had Mark Lee in 1955 and Kyle James followed in 1960. He worked with Gifford-Hill and Gifford-Hill Credit Union for 40-years, then joined HelenLee running Hearon Realtors. After retiring, he went back to school and earned his Masters in Christian Leadership at Criswell College, traveled to parts of the US, Brazil and the Ivory Coast on various mission trips, spreading the Gospel. He passionately taught the Bible in area prisons for over 20-years. Until very recently, he was still memorizing scripture and talking to his caregivers about Jesus. One of the hospice volunteers asked him to teach her the Bible every Saturday. Until recently, he always lead the prayer at his table in the dining room. Years earlier, Heard baptized four of his grandchildren, happy to know they trusted Jesus as their Lord and Savior. Pastor Mac Brunson once bragged about Heard from the pulpit as an example of a man of prayer. D.S. Hawkins wrote today "what a life and what a legacy he left you... love that guy and have from the first time I saw him... so gentle.. so good.. so godly." Heard's greatest ambition was to lead others to Christ. He often would return from a prison visit reporting how many men accepted Christ that day. Heard faithfully cared for his wife of 68 years as she declined with the disease of Alzeimer's from 2012 to 2019. Although those extremely difficult years being the sole caregiver took a toll on his health, he seemed lost without her after she passed. Afterwards, his health deteriorated at an accelerated pace. His health was further impacted due to the isolation caused by the covid-19 preventive measures, keeping family and friends from visiting at his assisted living home. Heard always lovingly cared about others, and that continued until the end. The caregivers all said Heard was their favorite and that they were so happy to have met him before his health declined. The hospice coordinator called this morning sobbing in grief. That typifies his impact on people until the very end. Heard is survived by Mark (Andrea), Kyle (Kim), James (Katy), Mark Jr (Kate), Kyndall, Sarabeth, David, and Mary Grace. Due to the covid-19 environment, there will not be a formal celebration of life. Burial will be at the Dallas-Fort Worth National Cemetery, next to HelenLee. If anyone wants to make a contribution in Heard's memory, please send to Northrich Baptist Church, 1101 Custer Road, Richardson, Texas 75080. Heard's great nephew, Brent Tucker, is the pastor, and a cherished family member.

Hearon, Marion Heard. A much loved father, and grandfather (Papa-daddy) moved to Heaven on May 27, 2020, just in time for breakfast. He was born in the tiny community of Cotton Gin, Texas to Stella Fitzpatrick Hearon and Uriah Joseph Hearon... View Obituary & Service Information

The family of Marion Heard Hearon created this Life Tributes page to make it easy to share your memories.

Hearon, Marion Heard. A much loved father, and grandfather (Papa-daddy)...

Send flowers to the Hearon family.