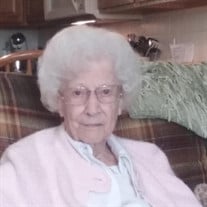 Mary Virginia (Ginger) Klinefelter Huffman, age 104, peacefully joined the Lord on March 29, 2022, surrounded by family at her home at Hoffman Lake. She was preceded in death by husband of 68 years, John Frank Huffman; son, John Thomas Huffman; brother John Harrison Klinefelter; and sisters, Eileen Wiltfong and Cuerenna Snyder. She is survived by daughter Constance Joan Parker and husband Jim of Duncanville, Texas; son John Thomas’ wife Eleanor of Englewood, Tennessee; son Stephen Allen and wife Carol of Lancaster, Kentucky; son Robert Kent and wife Cheryl of Warsaw, Indiana; and many grandchildren, great grandchildren, great-great grandchildren, nieces, and nephews. Ginger was born in West Union, Illinois, on March 20, 1918 and the family later moved to Etna Green, Indiana, where she attended Etna Green High School. It was there she met her husband, John, and they were soon married after he graduated. Here is a side story about how Mom got the name “Ginger” in her own words: “Granddad and Grandma Klinefelter were there, and everyone was getting ready to go to Terre Haute. Mother had dressed me up in my best bib and tucker. When everyone was ready to go, I was nowhere to be found. Granddad finally found me behind the house sitting in Mother’s wash boiler which was full of rainwater. Mother always caught rainwater to shampoo our hair. Granddad took me out of the water and told Dad and Mother that I was full of “Ginger”. Well, from that day to this the nickname “Ginger” has stuck with me and hardly anyone calls me anything else.” John and Ginger moved to a farm owned by John's father. It was there Ginger gave birth to their first child, Constance, followed by three sons: Thomas, Stephen and Robert. They purchased the farm, and John farmed and usually had other employment to make ends meet. Ginger learned to milk cows, drive the tractor, and could take over most "farm chores". She also maintained the household work, gardening, canning, cooking, sewing, and making sure all four kids were ready for school. Ginger ironed everything, including sheets. Sunday was a day for not only church service, but a day when other family members, who lived in Kokomo etc., would be invited to the farm for lunch. On other weekends, the entire Huffman clan would take off after church for Kokomo to visit John’s side of the family. Ginger was also active in Eastern Star where her brother, John, invited her to join the Mason's. She later became the Worthy Matron of her chapter and was known as the "Tractor Lady" and the "Sophisticated Lady!” She would wear a lovely long dress to special occasions of the chapter. In 1964, John was offered a position at Lone Star Boat Company in Plano, Texas, while working at the Lone Star Boat Company located in Bremen, Indiana. They decided to make the move since all of the children were out on their own by this time. Ginger took a job in Dallas working for Titches Department Store, (which is now Dillard’s) working in the children’s shoe department. Ginger worked there for many years until retiring and they continued living in Plano, Texas. They were members of the First Christian Church of Plano. They continued living in Plano following their retirements. Ginger spent her later years living with her son, Robert and his wife, Cheryl at Hoffman Lake in Indiana, which is less than a mile from the farm where John and Ginger had started their lives together. In Ginger’s autobiography, she wrote, “You might ask what I would change, and I would say ‘Nothing.’ Each event sets another in motion. If we change one, it may alter everything. I feel very satisfied with my life.” Services were held at Deaton/Clemens Funeral Home, Bourbon, Indiana on Monday, April 3, 2022 with Deaton Funeral Home, Bourbon, Indiana in charge. Restland Funeral Home, Dallas, Texas will be in charge of the arrangements when Ginger is taken to be with John. The service will be held on Friday, April 8, 2022 at 2:00pm in the Memorial Chapel, located at Restland Funeral Home - 13005 Greenville Ave., Dallas, Texas 75243 To join this service please click the link: http://webcast.funeralvue.com/events/viewer/72099/hash:CF6934656208AEA3 In lieu of flowers the family is requesting monetary donations be made out to Boys Town, Nebraska

The family of Mary Virginia Huffman created this Life Tributes page to make it easy to share your memories.

Send flowers to the Huffman family.