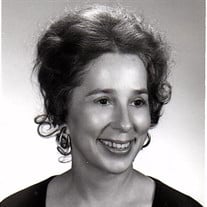 Mary H. Patterson, 95, died peacefully in Dallas on April 3 after a long and productive life. Born January 28, 1925, Mary Helena Hollon was raised in rural east Texas, near Commerce. Her parents, Sam and Myrtle Hollon, ran the County Farm during the Depression, and during her formative years on the farm she helped take care of the elderly and disabled residents who had been sent there by their families or had nowhere else to go. She was the youngest of eight children, two of whom died in childhood. She and her five older brothers remained close throughout their lives, and she adored her nieces and nephews. Her first job, at fifteen, was selling popcorn at the movie theater. As soon as she was eligible on her eighteenth birthday, she applied to work at Majors Field near Greenville, and was hired to record the cadets’ training flight times. She was very proud of her contribution to the war effort. Her many friendships, romances and adventures during World War II made it one of the best periods of her life. She met her first husband, Boyd Patterson, at the end of the war, and they settled in Greenville. After the birth of their two children they moved to Richardson, Texas, her home for the next 20 years. She was a woman of many interests and talents. She loved Girl Scouts, becoming a troop leader for the first time at 19, and later organizing a troop in Richardson. She took great pride in her needlework, and loved reading, horseback riding and travel. She was a charter member of Spring Valley Methodist Church and was active in Altrusa Club of Richardson. During her long and varied career, she worked for companies as diverse as Neiman Marcus and Owens Country Sausage. She made so much money as a Welcome Wagon representative that her father accused her of doing something illegal. The high point was the wedding and catering business she launched in 1966—Mary Patterson, Inc.—which grew into one of the most respected services of its kind in greater Dallas. Later in life she worked at Lancers Club and Scottish Rite Hospital. She married her second husband, Frank Smaldino, in 1980 and enjoyed a wonderful life with him in Dallas until his death in 1998. Mary was also preceded in death by her brothers Louie, Dan, Fred, Gene and Sammy, nieces and nephews Tommy, Shirley and Jimmy, and longtime treasured friends Jane Woodul and Novell DeBord. She is survived by son and daughter-in-law Boyd and Susan Patterson of Richardson, and daughter and son-in-law Julianna and Bill Greer of Fort Worth; stepdaughters Samantha and Francesca; grandchildren Morgan Bentley and husband Jay, and Marcus Patterson and his wife Stephanie; great-grandchildren Daniel, Savannah, London and Mayzie; nieces Peggy, Patty, Wanda, Susan and Melissa, and nephews Larry and Stephen; and beloved nieces and nephews in the Patterson family. Mary touched countless lives and will be remembered for her tirelessness, generosity, engaging personality, quick wit and, most of all, her boundless, unconditional love. The family is grateful to the staff of Monticello West for their loving care over the past 3 ½ years, and to Holding Hands Hospice. A memorial service will be held at Restland of Richardson at the earliest opportunity. Mary would be honored by gifts in her memory to Scottish Rite Hospital of Dallas.

The family of Mary Helena Patterson created this Life Tributes page to make it easy to share your memories.

Mary H. Patterson, 95, died peacefully in Dallas on April 3 after...

Send flowers to the Patterson family.