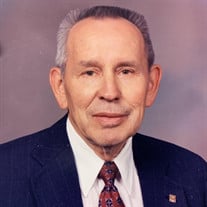 Max Herschell Tanner, Jr., age 92, of Dallas, Texas passed away on June 1, after a courageous eleven year battle with Parkinson’s. Born December 21, 1928, in a farmhouse near Wolfe City, Texas, to Gladys and Max Tanner, he was the oldest of four brothers and a sister. He graduated from Wolfe City High School before attending Arlington State College (Now UTA) later graduating from Texas A&M College, Class of 1950. Following graduation, he served in the Army Signal Corps and in 1951, married Sally Anne Booker, his wife of 70 years. Upon discharge from the Army, Max joined Dallas Power & Light (Part of Texas Utilities) and began a long and distinguished career in the electric power industry. Joining DP&L when Dallas was served by only two power stations, he was a leader in development of the Texas Utilities’ network of coal, nuclear, and gas-fired stations that now serve all of north Texas. Max managed many of the production assets of TXU including power plants, lignite mines, and natural gas delivery systems. At the time of his retirement from TXU, he was responsible for all gas and coal-fueled power stations in the Texas Utilities System. Max was a leader in the electric industry on the national and state level as well, serving on the National Electric Reliability Council, Chairing the Prime Movers Committee of the Edison Electric Institute, and Chairing the Technical Advisory Committee for the Electric Reliability Council of Texas among many others. Max enjoyed hunting, fishing, traveling with his wife, Anne, and visiting with family and friends. He was a benefactor of numerous charities and a significant donor to Texas A&M University. Max also served as a leader in the church, notably John Calvin Presbyterian Church where he spent much of his retirement energies. Max will be remembered fondly for his calm, strong demeanor, his humility, and his generosity to all. In many ways, his life is one to be admired not only for his accomplishments, but also for the manner in which he achieved them. Max is survived by his loving and devoted wife Anne, son Mark and his wife Janet, son Matt and his wife Linda, and their daughters Alison Gillies and Leanna Godwin, and his sister Zelda Hendley of Edmond, OK, as well as a host of other family and friends. The family appreciates the caring support of his dedicated caregivers of the past several years, Tonya Ross and Doris Foreman. Services for Max will be 2:30 pm Tuesday, June 8, 2021 at Memorial Chapel in Restland Funeral Home. Burial to follow in Restland Memorial Park. There will be a time of visitation one hour prior to service time. In lieu of flowers, the family requests donations to the Parkinson’s Foundation or the charity of your choice.

Max Herschell Tanner, Jr., age 92, of Dallas, Texas passed away on June 1, after a courageous eleven year battle with Parkinson&#8217;s. Born December 21, 1928, in a farmhouse near Wolfe City, Texas, to Gladys and Max Tanner, he was the oldest... View Obituary & Service Information

The family of Max Herschell Tanner Jr. created this Life Tributes page to make it easy to share your memories.

Send flowers to the Tanner family.